“According to the latest set of data from American market regulator FINRA, margin debt – the amount of money borrowed by either professional or private investors in the US – has just fallen for the seventh time in ten months. Even the pandemic could not force such a retrenchment, so perhaps this is a sign that the mood music is changing,” says AJ Bell Investment Director Russ Mould. “Meme stocks, tech stocks, cryptos have plunged and now even bellwethers like Apple have started to come under pressure as appetite for risk fades. The question now is whether it is time to start taking a contrarian view and easing into US equities, although historic drawdowns in US margin debt suggest it might yet be a little early. 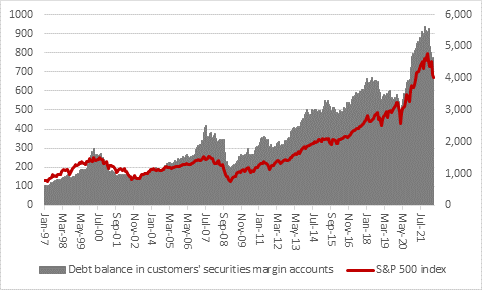 “Margin debt – or leverage – is used to gear up returns. In the US, Regulation T states that investors can take on margin debt worth up to 50% of their account balance, although figures lower than that are generally the norm.

“That is how the gearing works.

“This looks wonderful when markets are rising. The pain suffered when markets start falling can be excruciating, however, because the loan must still be paid back. And when markets get really sticky, investors can find themselves facing margin calls from their brokers, so they must put more money into their account to cover losses and reassure the lender. The risk is that they do not have that money to hand and must sell some investments to raise that cash, creating a cycle every bit as vicious in a falling market as it can be virtuous in a rising one.

“Right now, the drawdown in margin debt looks modest compared to the last two US equity big bear markets of 2000-02 and 2007-09 and the wobble of 2019-20 which began as the American economy started to slow and then culminated as the COVID-19 pandemic hit home. But that could mean, in a worst case, there is more to come.

“Growth in margin debt peaked in March 2021 – just as the Archegos hedge fund stumbled and then collapsed. Whether that was a coincidence or not, only time will tell. But the slowdown in risk taking is of the early stages of the 2000-2002 and 2007-2009 bear markets. Spookily, margin debt growth peaked in June 2007, the very month in which two highly-leveraged Bear Stearns hedge funds collapsed as their bets on sub-prime mortgages and derivatives thereof began to go sour. 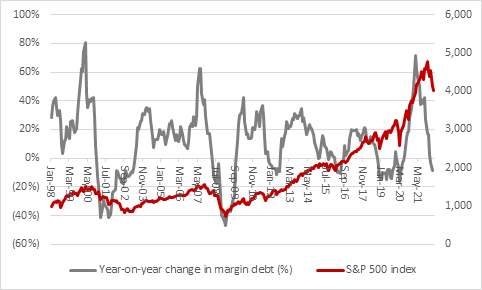 “Such apparently minor incidents can quickly have a major impact.

“When an investment firm with lots of debt has large positions that are becoming stressed (and in the case of leveraged entities using margin, that can mean even small drops below the initial entry price), that institution may be forced to sell assets in order to meet margin calls and make good on its borrowing, according to the demands of its creditors.

“Such selling leads the market to drop further, which prompts further loss of value of the collateral, which forces yet more selling – and so on.

“This also means that assets classes entirely unrelated to the initial problem position(s) can be caught up in the melee – which explains the old market saying about how ‘all correlations go to one’ in a bear market, as distressed sellers just liquidate anything for which they can find a buyer.

“History tells us this is not always as easy as it sounds, as J.K. Galbraith’s magisterial analysis The Great Crash shows. In his study of 1929’s market catastrophe he notes:

“Of all the mysteries of the stock exchange there is none so impenetrable as why there should be a buyer for everyone who seeks to sell. October 24, 1929, showed that what is mysterious is not inevitable. Often there were no buyers and only after wide vertical declines could anyone be induced to bid. Repeatedly and in many instances, there was a plethora of selling and no buyers at all.”

“Galbraith cites White Sewing Machine stock as an example. It plunged from $48 to $11 and yet no buyers emerged. Eventually an enormous block of stock was sold for one dollar a share.

“It is tempting to dismiss this as the follies of a distant era, of some 90 years ago and more but the rampant increase in margin debt suggests old but vital lessons are being forgotten, assuming they were ever learned in the first place.

“For (forced) sellers this can lead to disaster and bulls and bears of US equities will be watching the trends in US margin debt with a keen interest, even if it is released with a time lag. 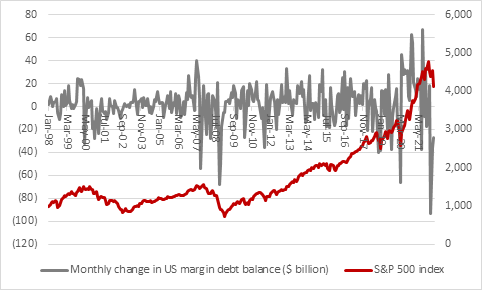 “But for cash-rich bears and sceptics who have been waiting patiently, a market decline, margin calls and forced selling can be manna from heaven. It can be a chance to pick up stock in the cheap at prices which bear no resemblance to the underlying trading of a company’s business or its financial strength.

“It is not for nothing that Warren Buffett once noted, ‘The stock market is a device for transferring wealth from the impatient to the patient.’”