“As a result of the US Government shutdown investors have been deprived of a lot of the regular macroeconomic data upon which they rely, although in the case of the US housing market the lack of fresh numbers may have been a blessing, because December’s existing homes sales data were quite frightening,” says Russ Mould, AJ Bell investment director. “A seasonally adjusted annual rate of 4.99 million homes was the lowest number since November 2014 and made for a year-on-year drop of 10.3%.

“That is the worst fall since May 2011 and comes at a time when the US economy is reportedly doing well, interest rates are low and the benchmark 30-year mortgage rate, at 4.45%, is some way below last year’s recent high of 4.95%. 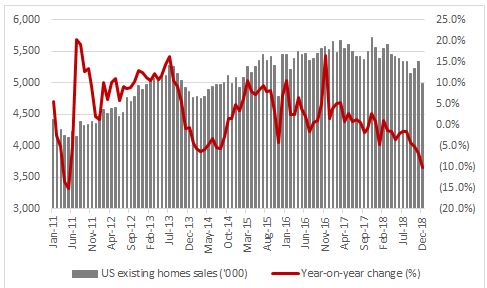 “A marked slowdown in the American housing market may not help Purplebricks in its quest to generate additional growth by cracking the US and it could knock equipment rentals giant Ashtead and plumbing merchant Ferguson too, both of whom get 90% of their sales from the US.

“Ashtead may be more interested in the new-build market, rather than the sale of existing homes, and it is far from exclusively exposed to residential construction.

“But the overnight profit warning from Stanley Black & Decker suggests there could be knock-on effects in the DIY and home refurbishment market that could be important for Ferguson, especially as there are signs that new homes sales are softening too.

“This may help to explain why Ferguson’s shares are down some 2% today, underperforming a weak market.

“The shutdown itself could start to affect workers’ pay and willingness to take on a mortgage if it goes on for too long but for the moment the issue seems to be one of affordability after a huge run in prices and an increase in the 30—year mortgage rate from its 2016 low near 3.5%.

“This also begs the question of what could happen if the US economy does surprise on the downside or US interest rates surprise on the upside – although such data, which meant that existing homes sales fell year-on-year for the tenth straight month – may help to persuade the Federal Reserve to back off and pause with its rate-hike programme.” 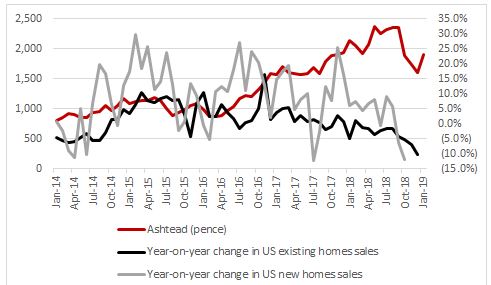 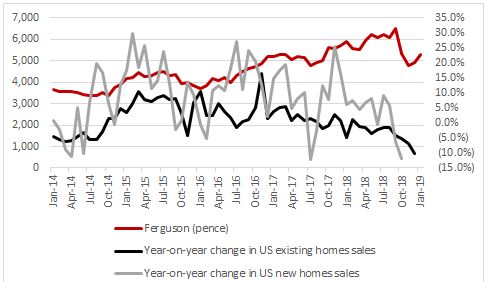