What could happen to markets if Apple posts a rotten quarter?

“Name changes mean that the sextet of Meta, Amazon, Apple, Alphabet, Netflix and Microsoft are no longer the FAANGM stocks but MAAANM and it’s not just the acronyms that are starting to jar. They have lost $2.1 trillion in combined market value between them since December, a drop sharp enough to leave five of the six in ‘bear market’ territory, after falls of more than 20%, with Apple the sole exception,” says AJ Bell Investment Director Russ Mould. “That raises the stakes for Apple’s second-quarter results on Thursday as any degree of disappointment here – or weak guidance for the third quarter – could put a further squeeze on the share prices of Big Tech and possibly the wider US stock market.

“The $2.1 trillion drop in the MAAANM’s combined valuation since their post-Christmas peak: 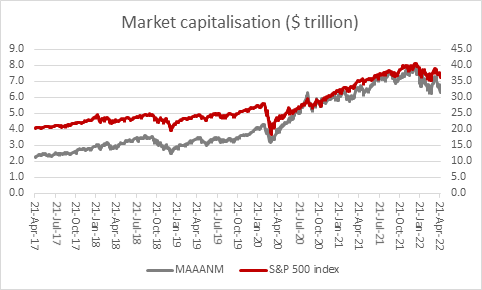 •    means their aggregate price tag has just fallen year-on-year for the first time since spring 2020 (when the pandemic first struck) and before that October 2019 (when stock markets were starting to wobble as the US Federal Reserve raised interest rates and continued its – ultimately short-lived – Quantitative Tightening programme). 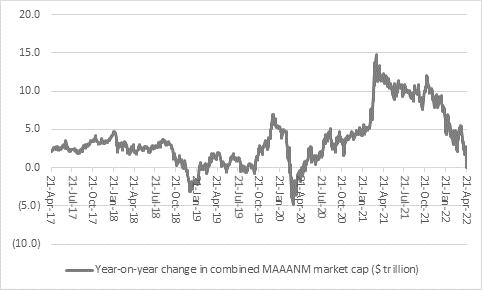 •    and still only means their total valuation is back to where it was in June 2021. If this really is the beginnings of a bear market in Big Tech (to follow the one in the small and mid-caps that have just been pounded for much of the last 12 months) then investors have seen nothing yet, at least if the 2000-03 meltdown is any guide.

“Earnings disappointments from Meta Platforms and Netflix have already seen their share prices go through the mincer. Netflix’s $600 million share buyback in 2021 provided no support and – entirely predictably – the fillip provided by Amazon’s stock split and $10 billion buyback proved only temporary, while investors now appear to have seen through the $11.8 billion financial pre-tax gain on its Rivian stake which so handsomely flattered Amazon’s fourth-quarter results for 2021.

“We may be reaching the stage of the market cycle where fundamentals and valuation really do matter much more than financial engineering.

“It may also be a sign that we are reaching the stage of the cycle where even the final havens and refuges for US stock market bulls are coming into question. As small- and mid-caps disappoint and are taken out to the woodshed, so investors tend to gravitate to larger-cap names in search of safety. Except the higher they push those share prices, the less safe and the more dangerous those stocks become, simply by dint of their lofty valuations – those high price tags mean that the skew between reward and risk starts to slant toward risk. Expectations are already high, so investors require constant earnings upgrades to justify share price momentum and valuations. Any failure to deliver can lead to a rapid reappraisal, as investors in Netflix have just found out to their cost.

“Netflix and Meta may have produced disappointing earnings or quarterly guidance already in 2022, but Apple, Microsoft, Alphabet and Amazon have not. Even so, their shares have started to sag.

“This may partly reflect concerns over higher interest rates and how they can affect the valuations of long-term growth stocks. Higher rates mean higher bond yields and high bond yields mean a higher discount rate in the discounted cash flow (DCF) models that are used to value the estimated future cash flows from growth companies. A higher discount rate in turn means that the net present value (NPV) of those future cash flows is lower and that means a lower theoretical fair value for the company and its shares.

“But it may also reflect some concern that earnings estimates could be exposed on the downside, too.

“Microsoft and Alphabet report on Tuesday, Meta on Wednesday and Apple on Thursday. The first three may set the tone but Apple is the key one, not least as it is the largest of the MAAANM sextet by market cap and the stock that has fallen least in percentage terms. If that one cracks, the bulls of not just tech stocks but US equities could be in trouble. Equally, if Tim Cook and team pull out another strong quarter and provide any upbeat guidance, then it is the bears who may be put to flight.

“The headline figure for Apple is the forecast earnings per share (EPS). The analysts’ consensus is looking for $1.43, compared to $1.40 a year ago.

“That figure has gone up from $1.38 at the time of Apple’s first-quarter report and has been unchanged over the past two months.

“Just as importantly, analysts are looking for $1.25 in the seasonally quieter third quarter to June. 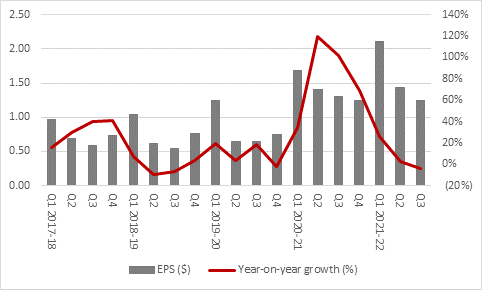 “Given wage cost and other commodity price pressures, lockdown in key outsourced manufacturing sites like China, ongoing supply chain pressures in industries as diverse as shipping and semiconductors and the war in Ukraine that certainly shows a lot of confidence in Apple’s brand, business model and especially the flourishing services and wearables business – although it remains to be seen if they also start to see the effects of inflation upon consumer confidence and Appleholics’ ability and willingness to spend on new kit or apps.

“And an EPS figure of $1.25 for Q3 would still represent a 4% year-on-year drop, to perhaps raise the question of whether Apple benefited from a pull-forward of demand during lockdown as it provided consumers with much-needed connectivity and entertainment. 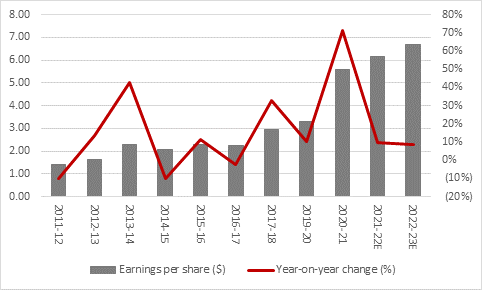 “Whether that is enough to maintain a forward price/earnings ratio in the mid-20s, and a small premium rating relative to the wider US market, remains to be seen, even allowing for Apple’s prodigious cash returns to investors.

“In Q1, Apple bought back $20.5 billion of stock and paid out $3.7 billion in dividends and since the company’s first-ever cash returns to shareholders in the fourth quarter of calendar 2012 the Californian giant has returned $586 billion to its investors via buybacks and dividends.

“That looks pretty amazing compared to the current $2.6 trillion market cap, let alone the $624 billion price tag Apple carried on 1 September 2012, and may provide support to the stock, should anything go wrong on Thursday.”