What higher interest rates have meant for US stocks

“The US Federal Reserve’s determination to continue tightening monetary policy, via both higher interest rates and sterilisation of Quantitative Easing, is likely to make life more difficult for investors, if history is any guide,” says AJ Bell Investment Director Russ Mould. “Given that benchmark 10-year US Treasury yields are still running well below the prevailing rate of inflation, at 3.0% plays 8.5%, the bond market seems to be that the US economy is strong enough to withstand a gradual tightening of policy – and that even if it isn’t, the Fed will chicken out and quickly ease again. Yet wobbles in headline indices – and routs in previously hot areas of the market like new floats, SPAC deals and technology shares – suggest that stock market investors area not quite so sure for two reasons.

“First, the tune from the Powell-led Fed appears to be changing dramatically, with inflation the key issues and little apparent heed being paid to employment, financial market conditions or the soaring US dollar.

“Second, history suggests that even if the US economy can withstand a higher cost of money, financial markets may not, as improved returns on risk-free cash (at least in nominal, pre-inflation terms) dampen the relative appeal of financial assets such as bonds and shares, where the risks are higher, especially if a bull run leaves valuations looking extended relative to historic norms.

“The current scenario of lofty valuations using metrics such as market cap-to-GDP and cyclically-adjusted earnings, recent frantic activity in new listings and speculation in meme stocks, and rising interest rates looks like the perfect set-up for a market stumble, based on the experiences of 2007 and 2000, as well as other historical share price upsets. 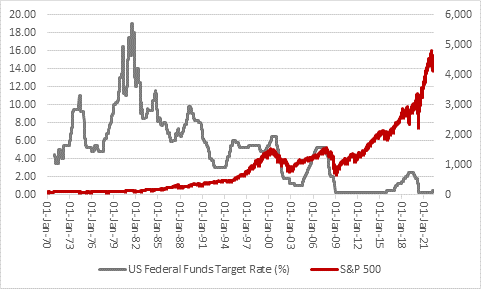 “Higher US interest rates may already be affecting some riskier areas of the markets. New float activity has cooled, SPAC deals have gone badly or failed to make it to market, highly-valued tech stocks have been cut down, meme stocks have failed to recapture their peaks and even cryptocurrencies have lost ground.

“None of this is to say that stock or bond markets are about to suddenly keel over but investors may be facing their next big tests. The last eight peaks in the S&P 500 were preceded by an average interest rate increase of 2.18 percentage points – and it has needed more than that on just two occasions to bring a bull market to a halt.

“Even if that 3.50% figure is below the 7.59% average which has called the top for US stocks after the last eight bull markets, you do have to wonder whether the US economy will prove more susceptible to even a modest tightening in policy this time around, given that there is so much more debt in the system, at the Government, corporate and consumer level.

“Investors also need to consider the role played by Quantitative Easing in the bull market that began in the USA in late 2008. QE helped to keep interest rates and bond yields low and encouraged risk-taking as investors sought a return on their capital – and this was an explicit Fed policy, one described by former chair Ben Bernanke as an effort to create a wealth effect by driving share and bond prices higher.

“That is all well and good, but it does beg the question of what happens to consumer confidence and spending patterns should share and bond prices start to fall, and wealth dissipate, at least on paper. The Fed ran out of ammo so far as interest rate cuts were concerned and it then hit the print button with the result that share prices went into orbit.

“So did speculation, at least if margin debt is any guide and it is margin debt – money borrowed to put into the markets – that could once more prove to be the downfall of a bull run in stocks, if rates rise, losses on stocks bought with borrowed money pile up and investors find themselves as forced sellers so they can repay their loans on time. Margin debt has already started to decline, and the S&P 500 has lost momentum, which may not be entirely a coincidence.” 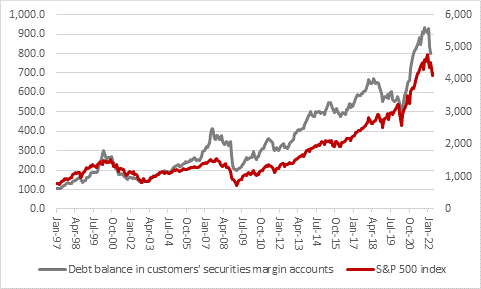