Why US stocks need to deliver strong Q2 earnings

“America is celebrating Independence Day just as its Dow Jones Industrials, S&P 500 and NASDAQ Composite all reach new all-time highs thanks to hopes for a trade deal with China and lower interest rates from the US Federal Reserve. Improved trade flows, lower interest payments and stimulus to corporate and consumer spending could all help American companies’ profits and investors with exposure to US equities will be looking for fireworks from the imminent second-quarter reporting season,” says Russ Mould, AJ Bell Investment Director. “The latest round of financial updates will begin in earnest on Monday 11 July when megabank Citigroup will unveil its results for the April-to-June period.

“But it may be that the outlook statements for the second half matter more than the actual results from the second quarter.

“This is because so many companies and analysts are talking about a ‘second-half recovery’ to justify estimates. Earnings growth is expected to be no better than low single-digit, in percentage terms, through to September before a 26% year-on-year surge in the final quarter of the year. 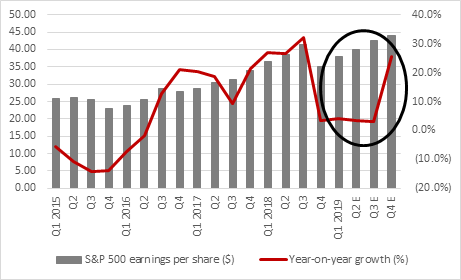 “For the moment it is hard to quite see where that could come from, without a marked surge in global economic activity, and the danger is that disappointment starts to creep in and erodes the healthy gains made in US equities by investors, just as happened in 2018.

“Two economically-sensitive American stock indices look a little less happy than the headline ones, to suggest that all may not be quite as rosy as it seems, when it comes to the US economy and corporate earnings power. 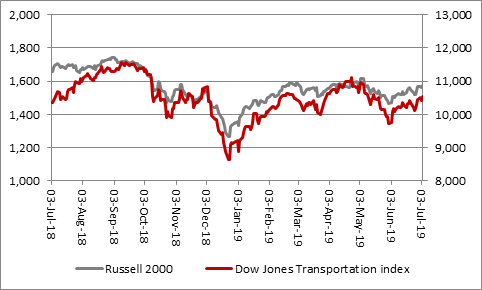 “That said, the Q1 reporting season exceeded expectations. According to data from S&P Dow Jones, 371 of the S&P 500 index’s constituents beat earnings forecasts while just 95 undershot them and the rest lived up to their billing.

“That meant that overall earnings for the S&P 500 benchmark rose by 4% year-on-year. That might not sound like much (and frankly it isn’t) but it did at least mean that the ‘worst case’ of an actual drop in profits was avoided.

“The upside surprise of Q1, coupled with hopes for some kind of trade agreement between China and America and the US Federal Reserve’s apparent new-found enthusiasm for interest rate cuts, is one reason why the S&P 500 is now bearing down on the 3,000 threshold.

“The question now is whether earnings momentum can remain strong enough to keep US stocks at these lofty levels or indeed take them higher.

“Helpfully, the base for expectation for Q2 (and for that matter Q3) is at least low – and in fact it keeps getting lower. 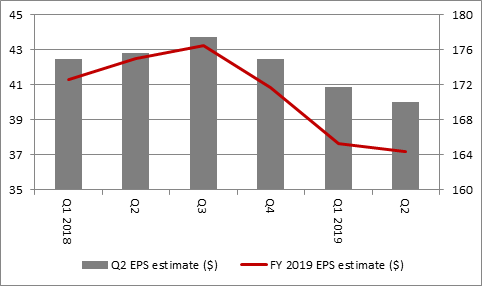 “This sets a low bar for expectations and therefore the scene for the ‘earnings beat’ which can juice share prices, at least in the short term.

“However, the combination of rising stock prices and falling earnings estimates could create a challenge for the longer term.

“Consensus earnings forecasts now put the US stock market on 17.9 times forward earnings per share estimates for 2019 and 15.9 times for 2020, based on the premise that earnings will rise by 9% this year and 12% next.

“Such multiples are far from outlandish, relative to the US stock market’s history, but they are based on near-term earnings forecasts, which have a habit of being wrong (and recently they have been consistently too optimistic).

“A different valuation methodology suggests the risks may be greater than they seem. Professor Robert Shiller’s cyclically-adjusted price/earnings ratio (CAPE) calculation, which is based on inflation-adjusted historic earnings on a ten-year rolling basis, still argues that US stocks may be overvalued, at 30 times forward earnings. 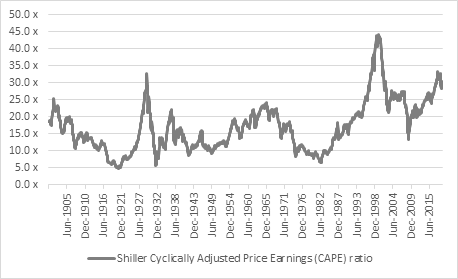 “Yet there are plenty who will brush aside Shiller, arguing that the CAPE indicator has been calling out US stocks as dangerously expensive for several years, to no great effect.

“This is a perfectly fair comment, given how US equities continue to go up and up and if the Federal Reserve starts cutting rates that could further fuel the bull market.

“But investors would do well to remember that Fed rate cuts did nothing to stop the start of the 2000-03 and 2007-09 bear markets as a recession hit home and corporate profits came under pressure. This is why earnings momentum is so important and why the Q2 results and second-half outlook statements could go a long way to shaping performance from the major US indices for the rest of this year and beyond.”