Why would investors want to own Gilts right now?

“The yield on the ten-year Gilt yield has come down since the Budget, if only by a few hundredths of a percent, but Chancellor Sunak will be delighted all the same, given his comment that a full percentage point change equates to £25 billion on or off the nation’s interest bill on its debts,” says Russ Mould, AJ Bell Investment Director. “For all of Mr Sunak’s efforts to start tackling the £2 trillion-plus aggregate deficit, even he admits that spending will continue to outstrip tax receipts for some time to come, adding to that figure. This again can only fuel the debate over whether Gilts still have a place in investors’ portfolios as part of a balanced asset allocation.

“Mr Sunak did not gild the outlook for Gilts when he gave the Budget, acknowledging that borrowing would continue to rise. This asks three questions of investors who have fixed-income exposure in their portfolios:

•    Why should anyone lend the UK money (and therefore buy its Government bonds, or Gilts) when it oh-so-clearly does not have the means to pay them back?

•    Why should anyone lend money to someone who cannot pay them back in return for a yield of just 0.72% a year for the next ten years (assuming they buy the benchmark ten-year Gilt)?

•    Why would anyone buy a ten-year Gilt with a yield of 0.72% when inflation is already 0.7%, according to the consumer price index, and potentially heading higher, especially if oil prices stay firm, money supply growth remains rampant and the global economy finally begins to recover if, as and when the pandemic is finally beaten off? Anyone who buys a bond with a yield of 0.72% is locking in a guaranteed real-terms loss if inflation goes above that mark and stays there for the next decade.

“Such concerns may be one reason why the ten-year Gilt yield has risen from last August’s low of 0.04%, although fixed-income investors are also starting to give a little more attention to inflation, too, as commodity and freight costs rise, initial frictions in trade flows result from Brexit and some industries, such as semiconductors, weigh supply shortages.

“That surge in the ten-year Gilt yield means that the paper’s price has fallen sharply since, just like equities, bond prices fall as yields rise and vice-versa:

“This is inevitably filtering through to exchange-traded funds (ETFs) dedicated to the UK fixed income market. The price of two benchmark-tracking ETFs has fallen, albeit to varying degrees. The instrument which follows shorter-dated (zero-to-five year) Gilts has fallen just 1.6% since the August low in yields: 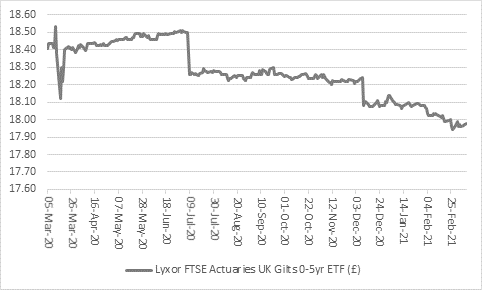 “Meanwhile, the ETF which tracks and delivers the performance of a wider basket of UK Gilts (once its running costs are taken into account) has fallen 8% since yields bottomed last summer. 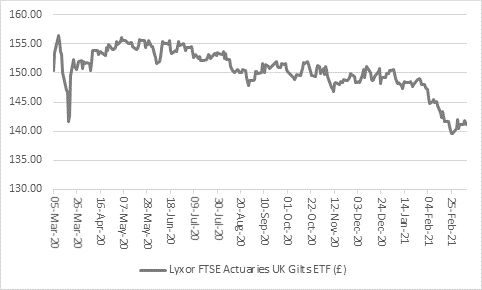 “That 8% capital loss is at least a paper only one, unless an investor chooses to sell now, but the yield on offer does not come close to compensating the holder for that paper loss, which supports the bearish view that bonds now represent ‘return-free risk’.

“However, the higher bond yields go, the greater the return they offer and that means at some point investors may decide that the rewards are sufficient compensation for the risks, especially as three arguments could still support exposure to UK Gilts:

•    The market’s fears of inflation could be misplaced. Bears of bonds have been growling about record-low interest rates and record doses of Quantitative Easing would lead to inflation for over a decade – and it has not happened yet. If the West does turn Japanese and tip into deflation, even bonds with small nominal yields would look good in real terms and possibly better than equities, which would do poorly into a deflationary environment, at least if the Japanese experience from 1990 until very recently is a reliable guide. 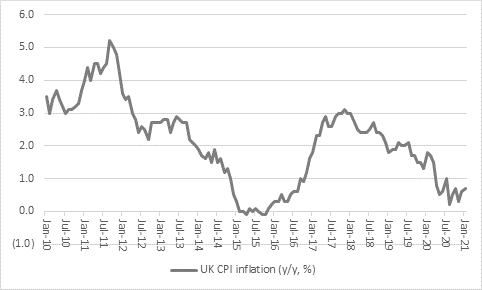 •    The UK’s financial situation may not be quite as bad as it seems. Yes, the national debt is growing but the Bank of England’s monetary policy is keeping the interest bill to manageable levels. The Government’s interest bill as a percentage of GDP has hardly ever been lower. That buys everyone time and is also why Mr Sunak is tinkering with taxes, to convinces bond vigilantes and lenders alike that the UK can and will repay its debts, as it has every year since 1672’s Stop of the Exchequer under King Charles II. A big leap in bond yields (borrowing costs) would be expensive. 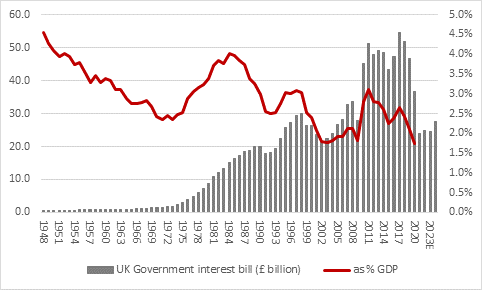 •    The Bank of England could yet move to calm bond markets with more active policy. Whether that soothes inflation fears is open to question but financial repression could yet come into play, supporting bond prices and reducing yields.

“In sum, there are still multiple possible outcomes – and no-one has a crystal ball. Therefore, bonds could yet have a role to play in a well-balanced portfolio over time, but it is inflation, rather than risk of default, that looks likely to be the greatest threat to any holder of Gilts.”