•    In five of the six years since the pension freedoms launched in April 2015, the first three months of the tax year has seen the highest volume of flexible withdrawals
•    The exception is the 2020/21 tax year, when withdrawals dipped to £2.3 billion amid severe stock market uncertainty
•    Total withdrawals have been between 10% and 33% higher between April and July than the next largest quarter in every other tax year
•    Emergency taxation, annual allowance cuts and sustainability of withdrawals among the bear traps people need to watch out for when taking taxable income from their retirement pot

“Until 2020, the beginning of a new tax year has traditionally been peak pension withdrawal season, with UK savers taking advantage of a fresh set of tax allowances to access larger amounts from their retirement pots.

“In fact, before the pandemic hit withdrawals in the first three months of the financial year had been between 10% and 33% higher than in subsequent quarters.

“That all changed last year, when retirement income investors spooked by the uncertainty of lockdown – not to mention double-digit market falls – tightened their belts, with year-on-year withdrawals dropping 17%.

“This likely reflected people choosing to either delay accessing their pension, pause withdrawals or reduce the amount they were taking as income in the face of profound uncertainty.

“While most of us still have fewer things to spend our money on at the moment – particularly given restrictions on foreign travel – the success of the Coronavirus vaccine and more stable market conditions mean we should expect to see a significant jump in withdrawals in the coming quarter.

“For those accessing their retirement pot during this period, there are various pitfalls and bear traps to watch out for.” 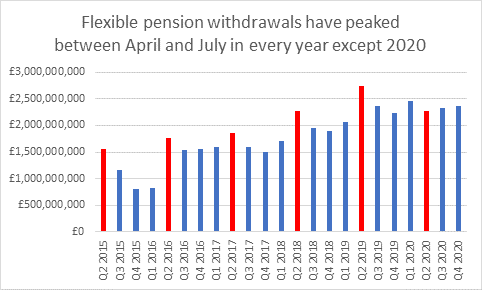 1.    Taking taxable income flexibly from your pension will trigger an irreversible £36,000 cut in your annual allowance

“Anyone considering taking taxable income from their retirement pot for the first time needs to be aware of the severe impact it will have on their ability to save tax efficiently in a pension in the future.

“Taking even £1 of taxable income will trigger the money purchase annual allowance (MPAA), reducing the amount most people can save in a pension each year from £40,000 to just £4,000.

“Furthermore, if you trigger the MPAA you will lose the ability to ‘carry forward’ unused pensions allowances from up to 3 previous tax years, meaning in some cases the impact will be a £156,000 reduction in the potential annual allowance in the current tax year, from £160,000 to £4,000.

“To avoid an annual allowance cut, savers who have the option should consider using money held in vehicles such as ISAs or cash savings accounts first. For those who only have their pension, just taking your 25% tax-free cash will also allow you to retain the £40,000 annual allowance.”

2.    Your first taxable withdrawal will be subject to emergency ‘Month 1’ taxation

“Since the pension freedoms launched in April 2015, around £700 million has been repaid to savers who were overtaxed on taxable withdrawals.

“When you first take a flexible payment from your pension, HMRC will automatically tax it on an emergency ‘Month 1’ basis. This means that the usual tax allowances are divided by 12 and then applied to that first withdrawal.

“For example, if someone made a £12,500 taxable withdrawal in 2020/21 and had no other taxable income, they might expect to be charged 0% income tax as the withdrawal is within their personal allowance.

“In total, rather than paying zero tax they would face an initial – potentially shocking - bill of £3,958.

“For those taking a regular income this shouldn’t be a problem, as any overpaid tax in the first month will be ironed out via your tax code. However, where it is a single payment over the tax year there are two options – wait until the end of the tax year for HMRC to hopefully sort it out, or sort it out yourself by filling out one of three forms.

“Once you’ve filled out and sent off the relevant form, HMRC says you should receive a refund of your overpaid tax within 30 days.”

The link to the forms is available here: https://www.gov.uk/claim-tax-refund

3.   Think about the sustainability of your retirement plan – and beware big withdrawals during falling markets

“Last year saw the first bear market – characterised by falls in stocks of more than 20% - since the pension freedoms launched in 2015. The pandemic and global economic shutdown brought into sharp focus the importance of understanding the investment risks you are taking and managing withdrawals sustainably.

“This is particularly the case where large withdrawals come at the same time as big falls in markets, a phenomenon often referred to as ‘pound-cost ravaging’.

“As an example, someone taking a 5% inflation-adjusted income from their fund who suffered a 20% hit in their first year of drawdown and 4% growth thereafter could see their pot run out after 18 years – three years sooner than if they suffered the hit 10 years into retirement.

“Savers wanting to manage withdrawals sustainably and avoid selling down their capital at a low point in the market could use other cash resources – such as ISAs, savings or their 25% tax-free cash – in order to keep their underlying pension intact.

“Taking a natural income has also been a good strategy previously, although finding companies paying the dividends needed has been a real challenge over the past 12 months.

“For those who do take capital withdrawals from their pension, the key is to have a plan in place and review your income strategy regularly, ideally with the help of a regulated adviser, to ensure you aren’t risking running out of money early in retirement.”

4. If you’re just taking your tax-free cash, don’t forget about the remaining 75% of your fund

“The vast majority of savers cite accessing their 25% tax-free cash as the main reason for entering drawdown*. This is understandable given this is one of the main tax benefits of saving in a pension.

“Although accessing your tax-free cash won’t necessarily mean a change in your underlying investments, it is worth using this as an opportunity to review your retirement plans and ultimate goals.

“For example, someone planning to take a regular income after accessing their tax-free cash will likely have a different asset allocation to someone who doesn’t plan to touch the remaining money for 15 years.

“While many will understandably be spooked at the prospect of investing at the moment, it is worth remembering that short-term volatility has historically been the price you pay to enjoy longer-term growth.

“Investors also need to be aware of and comfortable with the risks they are taking.

“Although investments can go down in value as well as up, the value of cash will be eaten away by inflation over time.”

5. Do you want to spend your pension or leave it to loved ones after you die?

“Pensions are no longer just about providing an income in retirement. Since 2016, savers have been able to pass on leftover pensions tax-free if they die before age 75.

“Where the pension holder dies after age 75, the remaining funds will be taxed at their recipient’s marginal rate when they make a withdrawal.

“For those who want to leave assets to loved ones, it therefore often makes sense to leave as much of your pension untouched as possible in order to minimise your tax bill.

“This means when you come to flexibly access your pension for the first time, you should think not just of your retirement income strategy but also your IHT plans.

“It’s also important to ensure your nominated beneficiaries are up-to-date so the right people inherit your pot.”