“Apple’s shares are up by a third this year and the company is within touching distance of the $1 trillion market cap mark again, but its shares are still some 10% below their all-time high and investors will be looking to Tuesday night’s third-quarter figures to bury the bad memories left by January’s profit warning,” says Russ Mould, AJ Bell Investment Director. “Earnings estimates have crept up a fraction since the release of the second-quarter earnings release in April and analysts will be seeking signs of a stabilisation in iPhone sales as well as ongoing growth in Services and Wearables to help the Californian giant to re-establish some positive earnings momentum.

“Consensus estimates have Apple making a fresh peak in earnings per share in its three quarters’ time, the first fiscal quarter of 2020-21 but before then Apple has to drag itself out of its third profit slump this decade.

“After the 10% year-on-year drop in EPS in the second quarter, consensus is looking for another 10% decline in the current quarter and 8% drop in the next before a return to growth, with a 5% year-on-year advance to that record of $4.37 a share. 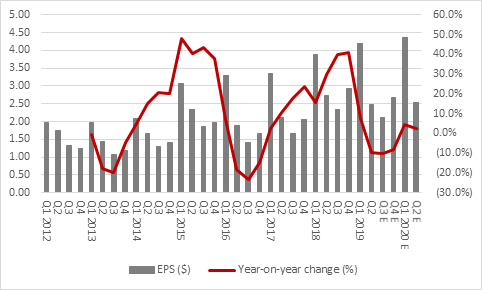 “The previous slumps were related to iPhone product cycles and this one may be no different, given slower-than-expected take-up of iPhone X after some meaty price hikes, a slowdown in China and concerns over lengthening product cycles as cost increases make Apple buyers ponder whether the incremental functionality is worth it or not.

“Although Apple has stopped releasing iPhone units – itself not a great sign, in all honesty – the firm still releases revenues. Sales fell year-on-year for the second straight quarter last time, down 17% to $31 billion and fans of the stock will be looking for improved momentum here. Meantime, they will be looking for further growth from services, with $11.5 billion on sales last quarter, and wearables, with $5.1 billion.

“In total those two units came to 29% of group sales in Q2, up from 16% three years previously, against 54% from the iPhone. 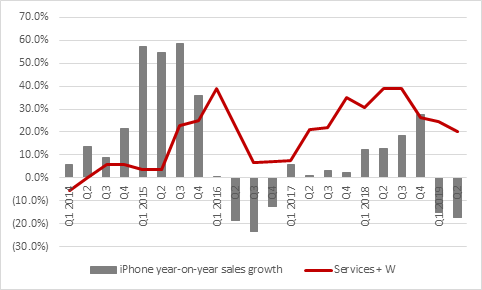 “That little lots gets to the consensus of around $2.10 in earnings per share. All eyes will be on those figures and also guidance for Q4, when the market estimate is $2.68.

“As a final point, shareholders will be looking to Apple for further cash returns. Since it began to pay dividends and run share buybacks Apple has handed a total of $333 billion to investors, more than a third of its current market cap. This reflects loyal customers who like both the products and the app and developers’ ecosystem, loyalty which confers pricing power and pricing power which brings high operating margins and strong cash flow. This is what has attracted the attentions of Warren Buffett and Berkshire Hathaway, who clearly believe that Apple’s competitive position is well-entrenched, defensible and in safe hands, despite the recent departure of Sir Jony Ive, who is leaving his post as chief design officer. 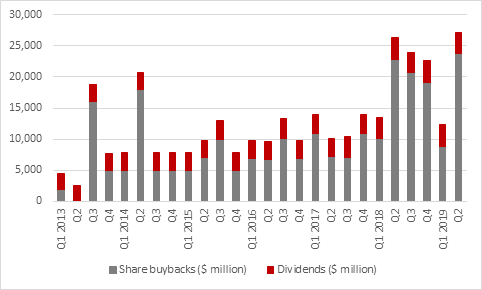