Does GameStop frenzy mean it is game over for the US equity bull run?

“Whether the so-called fun in GameStop is over or not remains to be seen but the share price has made a round-trip from $65 to a closing high of $347.51 (and an intra-high high north of $480) and then back to $64 all in the space of eleven trading sessions and no-one can really view this as healthy,” says Russ Mould, AJ Bell Investment Director. “Such frenzied market activity usually comes nearer tops than bottoms and three ‘softer’ gauges of sentiment toward US equities offer good reasons for getting nervous - although there are enough variables at play, and enough dollars being thrown at it by Capitol Hill and the US Federal Reserve, to give bulls hope that they can buck history for a while longer yet. 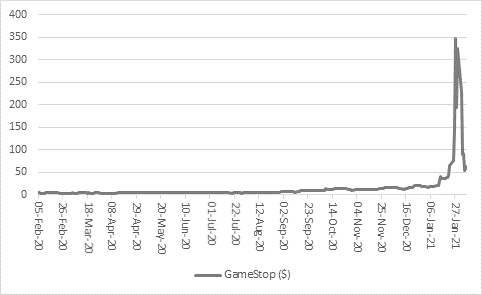 “The first indicator relates to GameStop and the epic “short squeeze,” which has inflicted pain on hedge funds who were betting on a drop in the share price and instead were confronted by stunning gains.

“Those hedge funds have mismanaged their risks and paid the penalty and credit where credit is due to the retail investors who spotted just how big aggregate short position were against this certain stock and how hard it would be for the bears to close out their illiquid positions.

“But the most shorted stocks in America have been massively outperforming the wider benchmarks since last November. This suggests that GameStop was a professional hit first – hedge funds forcing other hedge funds out of their positions by squeezing share prices higher – with retail investors cottoning on (or even being encouraged to follow a trail of breadcrumbs?) and piling in second. The share gains may have little or nothing to do with the company’s fundamentals and everything to do with market technicals and unalloyed financial speculation – something that tends to develop a lot closer to stock markets tops than it does stock market bottoms. 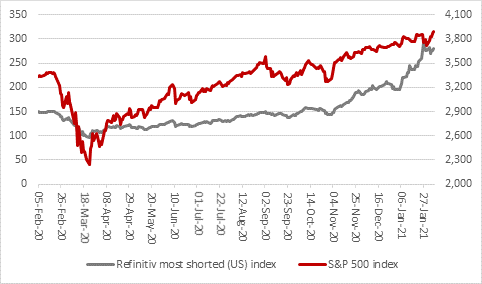 “But it is not just old, previously downtrodden stocks that are feeling the love. Market newcomers are receiving plenty of adulation, too. This can be seen in US-traded Renaissance IPO Exchange-Traded Fund (ETF), which is designed to mirror the returns from 80% of the market capitalisation of the universe of companies that have gone public in America within the last two years, minus its running costs.

“Airbnb and DoorDash were both added at the last quarterly review in December. The ETF currently tracks 49 stocks and it is up by a third since November, helped by strong early gains in those two recent market entrants. Investors snapping up IPOs for the early share price ‘pop’ and to snag a quick gain can also sometimes be a sign of a frothy market. 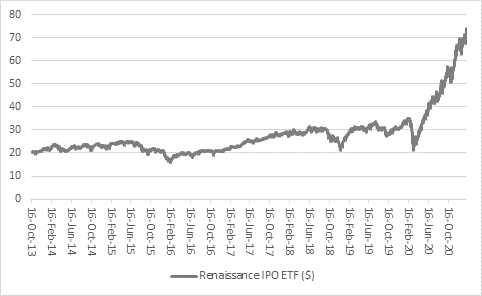 “One other trend that can be a sign of animal spirits and that as a result investors and traders are perhaps taking on more risk than they would normally is margin debt. This is the amount of money an investor can borrow from their broker via a margin account to buy shares (or even short sell them).

“Regulations cap the amount that can be borrowed at 50% of the account balance but even so, margin debt is at record highs. This looks smart and gears up returns when markets are rising (as the investor or trader can get more exposure) but looks less clever when markets are falling. Indeed, falling asset prices can force so-called margin calls where the investor or trader must start repaying the loan – and sometimes they must sell other positions to fund that repayment, creating a negative feedback loop in markets. 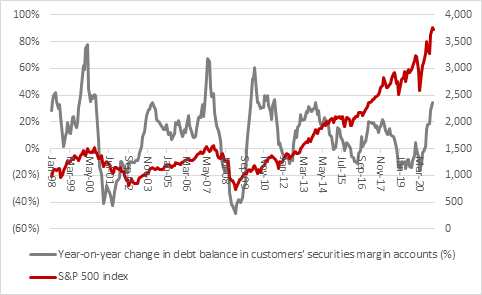 “There is no sign of such forced selling yet, although it will be worth watching for it should GameStop’s shares start to sag and there are no guarantees that history will repeat itself and see these trends act as an early warning sign of a market top.

“After all central banks keep on pumping out liquidity and emboldened investors and traders, accustomed to their support, may simply demand more if there is a market dislocation, although whether this is a trend to be encouraged over the long run is questionable, especially when it can be argued we are already in the third and final stage of a typical bull market, based on Robert Rhea’s outline of one in The Dow Theory way back in 1932: ‘There are three principal phases of a bull market: the first is represented by reviving confidence in the future of business; the second is the response of stock prices to the known improvement in corporate earnings, and the third is the period when speculation is rampant – a period where stocks are advanced on hope and expectations.’

“The tricky bit is no-one can tell how long that third and final stage will be or what will bring it to an end.”