Four indicators suggest markets may be gathering for an upwards move

“The FTSE 100 looks to be stabilising in the wake of February’s sudden sell-off but the index is still trading some 7% below the all-time closing high of 7,779 reached two months ago. It is being helped by a slight retreat in Government bond yields, where an increase had threatened to suck some cash away from stocks, and especially sterling, whose gains in late 2017 had threatened to unpick the simple, post-Brexit-referendum narrative of pound down/FTSE 100 up,” says Russ Mould, AJ Bell Investment Director.
Russ Mould
14 March 2018
Share:

“Besides keeping an eye on inflation and interest rates, as well as the pound and its impact on corporate profits, dividend pay-outs and the wider economy, investors may also like to (re)visit five key indicators that can be used to judge whether the UK stock market is poised to surge higher or begin a fresh slide lower.

“In sum, only one of the quintet signal looks to be warning of possible danger – the copper price – while the other four suggest the FTSE 100 may be gathering itself in preparation for a fresh upward move, although the transport and small cap indices need careful scrutiny and it is hard to see volatility remaining so subdued for much longer.”

The good news (for bulls)

1.     The transportation indices. The old theory goes that if the transports are not performing, the industrials can’t either, as if nothing is being shipped, nothing is being sold. It is therefore reassuring to see both the FTSE All-Share Industrial Transportation and America’s Dow Jones Transports indices start to regain their momentum, although the potential ‘double-top’ pattern on the UK indicator needs to be watched. Bullish investors will feel happier if the FSTE All-Share Industrial Transportation index can steam higher and a lot less comfortable if it rolls over once more. 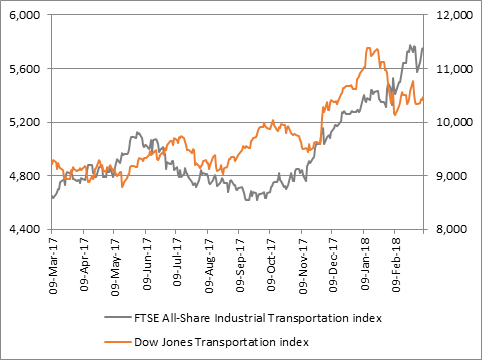 2.     Small caps. Market minnows are an excellent indicator of risk appetite - they tend to outperform when investors are bullish and fall faster than the broader market when they are bearish. The UK’s FTSE Small Cap and America’s Russell 2000 are both moving higher again and bulls of equities will want to see these benchmarks sustain their recovery from February’s sharp sell-off. 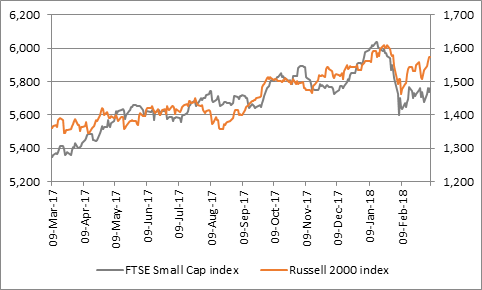 3.     Market volatility. Volatility can be the friend of the investor – it can provide chances to sell stock expensively or buy it cheaply – but history shows that stock indices progress best when they make serene progress and a series of modest gains and tend to fare less well when trading is choppy and there are big swings up and down.

The FTSE 100 moved higher with a minimum of fuss in 2017 when there were just 17 open-to-close movements of more than 1% in the index throughout the whole year. That was the lowest total since 2005’s reading of 18 and the UK stock market advanced smartly for a further 18 months after that.

However, there have already been nine movements up or down of more than 1% in 2018, including the first one of more than 2% since last April, and investors with long memories will remember that the very placid 2005 was followed by a steady increase in volatility which eventually reached  a crescendo with the 2008 smash. 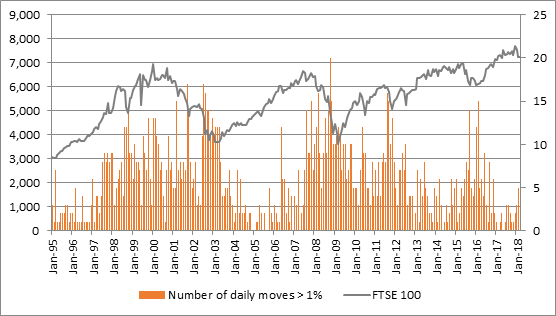 4.     Valuation – and especially the dividend yield. In the end, the valuation paid for an asset is the ultimate arbiter of the investment returns made on it. Valuation metrics using forecast earnings can be unreliable, as those forecasts are often wrong, so dividend yield can offer more comfort. Management teams are reluctant to cut the shareholder payouts as this tends to hit a share price hard and potentially their own wallets.

That may be less than the 294 basis point premium on offer in July 2016 but the All-Share has only twice previously offered a premium yield of 2% or more since 2008 - and on both occasions the stock market promptly made healthy gains.

The danger here is that inflation expectations go higher and either drag bond yields with them or prompt a Bank of England interest rate increase, or both, potentially eroding the premium yield on offer from stocks.

Equally, there is a risk dividends could be cut, especially as the FTSE 100’s dividend cover is thin by historic standards at around 1.6 times, when a 2.0 times cover ratio would be ideal.

A bond-market blitz looks to be a bigger risk than dividend cuts at the moment, especially as only easyJet, Pearson and Sainsbury cut their shareholder payout in 2017 of late.

But the 10-year UK Gilt yield has come in from 1.64% in mid-February to 1.50% and that retreat has helped the FTSE 100 by reaffirming stocks’ yield premium relative to bonds, even that comes in return for greater capital risk. 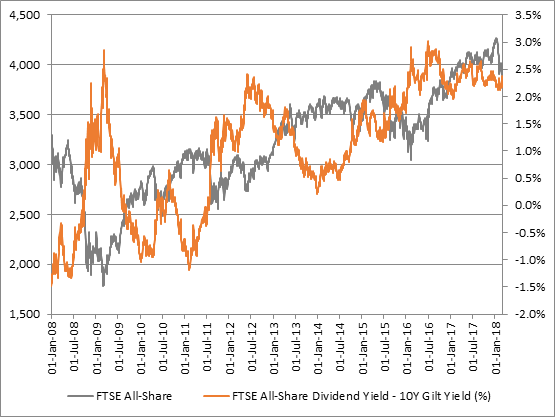 The not so good news (for bulls)

1.     Dr Copper. The industrial metal is a great barometer for global economic health. Its recovery from a six-year low in January 2016 looks to have rather fizzled out and the metal has lost some 6% of its value in 2018. A fresh advance in copper would help to reaffirm investors’ faith that the currently dominant (but increasingly consensus) inflation/reflation trade is the right one, while further weakness would question whether investors were correct to dump their bonds and defensive stocks (such as utilities) and pile into bombed-out value, turnaround and cyclical stocks quite so quickly. 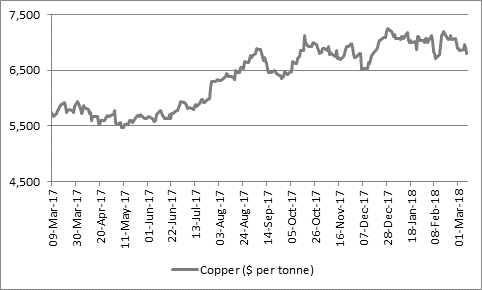