“The FTSE 100 is currently doing a good job of confounding the Cassandras, naysayers and pessimists with a capital gain of nearly 8% in 2019 to date, despite the ongoing uncertainty over global tariff and trade policies, Brexit and gathering concerns over the globe’s economic growth prospects.

“The index’s advance may be the result of its valuation, since a forward price/earnings ratio of 12.5 times and a prospective dividend yield of 4.7% look attractive, both in absolute terms and also relative to the other geographic options available to equity investors. Such relatively lowly multiples could suggest that a lot of bad news is already in the price, especially after the second-half slump in the index last year. After a marked period of underperformance which stretches back to the summer 2016 referendum vote on EU membership, UK equities look unloved and may therefore be undervalued.

“Against this backdrop, analysts are expecting the FTSE 100 generate an all-time high pre-tax profit of £223 billion in 2019. That is a 13% increase on 2018 and finally takes the index past the £202 billion peak of 2011, when over £100 billion in pre-tax profit came from the then-buoyant mining and oil sectors alone. 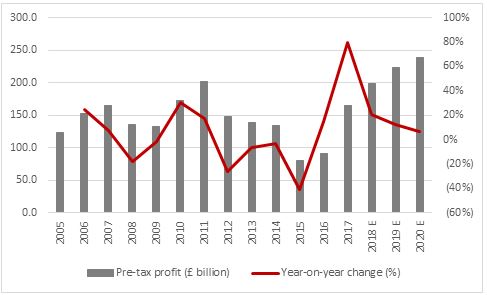 “In 2019, oils and miners are forecast to churn out £74 billion in profit, so the base of the FTSE 100’s earnings power seems more broad, which should be a good thing.

“Financials – and the banks in particular – and consumer staples stocks such as Diageo and Unilever – are also expected to make sizeable profit contributions.

“The decreased reliance on the commodity producers, where prices, and therefore profits, are difficult to predict is also welcome, although investors will need to keep an eye on the contribution to profits (and profits growth) from the financials, where the banks will have a key role to play.

“Analysts expect the Big Five banks – Barclays, HSBC, Lloyds, Royal Bank of Scotland and Standard Chartered - to increase profits in 2019 for the third time in a row and finally exceed 2007’s previous profits peak, at the end of the last credit, stock market and economic boom.

“The potential snag is that we have been here before. Analysts have predicted a new aggregate peak in profits from the banks for the past several years but that 2007 high of £35.8 billion has remained tantalisingly out of reach. 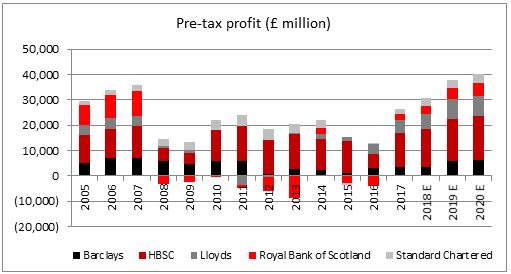 “There remains the risk that a final raft of PPI claims before the autumn deadline proves an obstacles to reaching and passing that 2007 number, while the banks must also continue to invest heavily in IT and digitisation to reassure customers over cyber-security and also fend off the threat posed by challenger banks and new, fintech rivals. Competition to win deposits and offer mortgages has started to weigh on net interest margins in the UK for good measure and neither HSBC nor Standard Chartered will want to see too much of an economic slowdown in either China or Hong Kong, so dangers do still lurk to the rosy profit scenario.

“With 25 FTSE 100 members trading on less than 10 times forward earnings, it is tempting to think that the gloom may just be a little overdone and that even meeting, let alone beating, earnings forecasts could be enough to convince the doubters to return to UK stocks.

Where is the catalyst for an upturn?

“The question now is what could trigger fresh interest in the FTSE 100 and other UK stock benchmarks. Some form of resolution to the Brexit negotiations impasse is one possibility, because investors would then at least be able to make a rational decision as to whether the circumstances they now face – good deal, bad deal or no deal – is already factored into valuations or not.

“Further back-tracking by central banks around the world with regard to monetary policy could also help, should they decide to keep interest rates lower for longer.

“The best catalyst of all would come in the fundamental form of positive momentum in both earnings and dividend forecasts.”