“Gerald Scarfe’s famous ‘Expletive deleted’ cartoon made his views on Richard M. Nixon very clear and for all of the revisionist analysis of the foreign policy implemented by America’s thirty-seventh President, holders of the US dollar could still have a few choice words to say about him, too. The American currency has been on a one-way trip lower since Nixon closed the gold window and ended the brief life of the Bretton Woods monetary system in August 1971,” says AJ Bell Investment Director Russ Mould. “There are more than a few parallels between the economic backdrop then and now and these trends may have gold bugs thinking they could yet have cause to celebrate the fiftieth anniversary of Nixon’s monetary policy revolution.

“In August 1971, President Nixon took the US dollar off the gold standard, ‘closing the window’ though which overseas governments could exchange paper greenbacks for the precious metal at a fixed rate of $35 an ounce.

“That manoeuvre, which effectively signalled the end of the Bretton Woods monetary system, enabled Nixon and the US to pay for welfare programmes and ultimately fruitless military action in Vietnam. Although economists and politicians hailed the policy as a liberation from a monetary straitjacket, investors may choose to draw their own conclusions as to what markets ultimately think of the launch of unfettered money creation.

“The scores on the doors are, after all, very clear. The end of Bretton Woods in 1971 paved the way for a floating dollar in 1973 but the American currency has not so much floated as sagged: gold has gained 4,160% across the last five decades against the buck. Put another way, the greenback has lost 98% of its value relative to the precious metal while 85% of its purchasing power has gone for good measure, thanks to an inexorable rise in the consumer price index (or inflation, in other words). 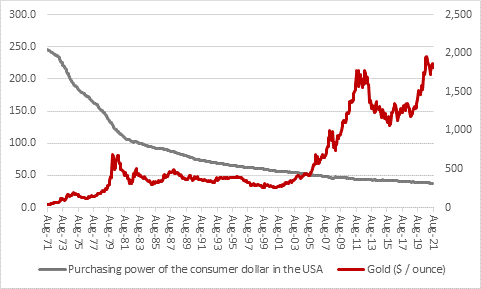 “Fifty years on, gold bugs may be tempted to argue that we are seeing an action replay of the events which prompted Nixon’s policy move, as a US government runs welfare programmes (and more besides, even allowing for the military withdrawal from Afghanistan) that it cannot afford and yet again bumps up against the current Federal debt ceiling agreed by Congress (currently $28.4 trillion). 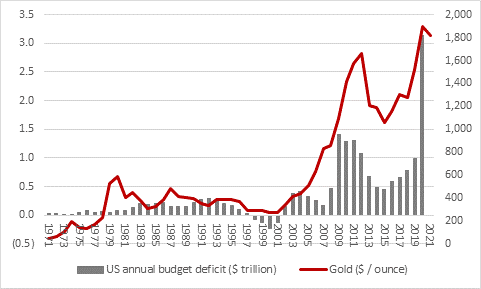 “That said, even the most ardent supporters of the precious metal may have found it hard to celebrate the fiftieth (golden) anniversary with too much vigour. Gold suffered some vicious selling in early August, for reasons which have yet to become entirely clear.

“Talk of a possible peak in the inflation rate in the USA could be one explanation. Others pointed to what they felt was a co-ordinated hit by hedge funds in the futures markets while a gathering consensus among economists that the US Federal Reserve may be about to start tapering its Quantitative Easing programme could have also had an influence.

“Whatever the reason, though, the plunge did not last long, and gold has again held firm at around $1,800 an ounce. But for it to break fresh ground and motor beyond $2,000 an ounce on a sustainable basis for the first time, one of three things may need to happen (or even a combination of them).

•    The first is that government debts keep rising and that QE is deployed to keep interest rates low and help fund them, as rising spending and rising deficits persuade investors look for stores of value to preserve their wealth. Gold is hard to find and costly to mine, so supply grows slowly, in contrast to the supply of money. The opposite – the reining in or even the sterilisation of QE – could therefore hit sentiment toward gold. The former may happen, given the Fed’s current rhetoric but three prior attempts to cease QE did not last long. Sterilisation, or balance sheet shrinkage and withdrawal of stimulus, looks highly unlikely given the growth in the US Federal Reserve’s balance sheet in the dozen years or so since the financial crisis and the Biden administration’s current spending plans. 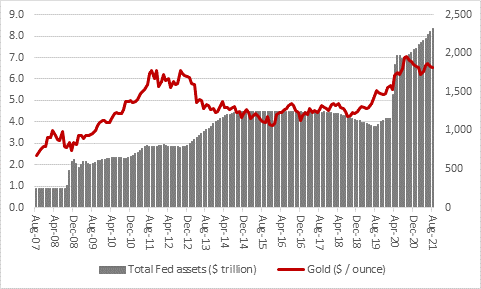 •    The second is that inflation stays elevated or keeps rising. This would knock faith in the narrative that central banks have everything under control, challenge the authorities’ view that the current round of prices rises in ‘transitory’ and potentially force interest rate rises whether central bankers want them or not. 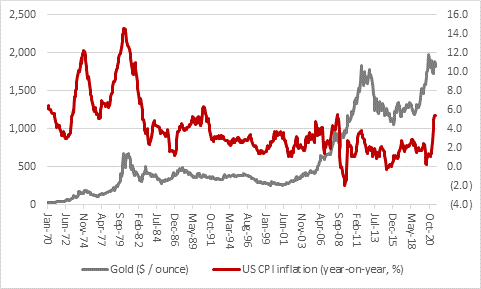 •    In theory, rising interest rates would be bad for gold, as improved returns on cash and higher bond yields would increase the cost of owning the metal (owing to foregone interest or yield). But that would depend upon what the real rate of interest is, adjusted for inflation and this is the third trend to watch. If inflation rises faster than rates, further eroding the purchasing power of paper currency in the process, then the post-Nixon experience of the 1970s would suggest gold could shine in such an environment. A surge in real rates, as seen under Federal Reserve chair Paul Volcker, could see the case for gold melt away, as it did in the 1980s and 1990s, although whether the Federal Reserve has the stomach for this remains to be seen. 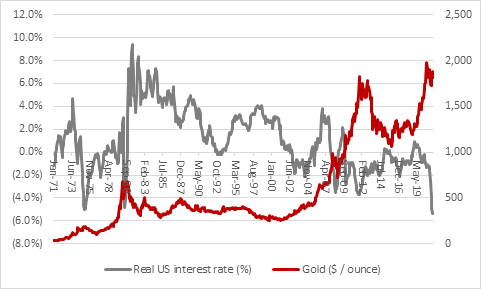