KKR fires up a bid for power plant play ContourGlobal

“Power utility ContourGlobal has hardly blown out the lights since its listing on the London Stock Exchange in November 2017 but a bid from private equity for the power utility offers a reminder of valuable lessons for investors,” says AJ Bell Investment Director Russ Mould. “First, cash flow is king. Second, investing for yield and income can bring its long-term reward to patient portfolio builders. Third, the weak pound continues to draw overseas predators to the London market. Finally, index-linked profits and cash flows are going to look increasingly valuable if inflation proves sticky.

“ContourGlobal floated four-and-a-half years ago at 250p and closed on Monday at 193p. Weak sentiment toward emerging market assets, as the world fell over itself to buy US-listed growth stocks at seemingly any price, did not help. The FTSE 250 member’s $3.7 billion debt pile may have put some off, especially at a time when interest rates had started to rise. And stated earnings per share of $0.12 did not look to cover 2021’s $0.1786 dividend, a figure which management intended to hike by some 10% in 2022. 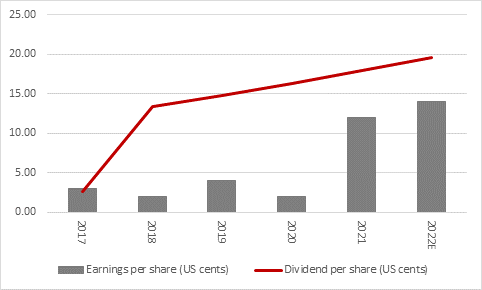 “In addition, utilities are often seen as bond proxies. Bond prices fall as bond yields rise, and utilities may move in sympathy as headline borrowing costs go up. This is partly because the discount rate in capital asset pricing models (CAPM) goes up as interest rates and bond yields go up, so the theoretical net present value (NPV) of future cash flows goes down, taking the perceived value of the equity down with it. 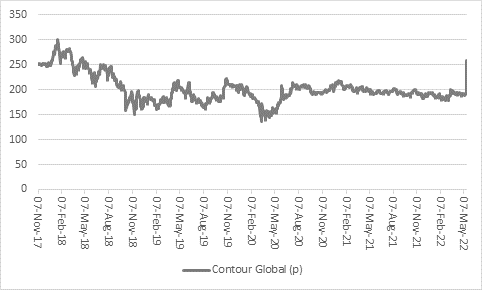 “All of that may have convinced investors that ContourGlobal’s prospective 2022 dividend yield of 8%-plus was either too good to be true, or at least the minimum it should have been offering, to compensate shareholders for the risks involved.

“But closer inspection would have revealed that ContourGlobal’s track record, business model and financial performance suggested the shares were too cheap, especially as this is a company which provides energy when the world is crying out for it. ContourGlobal owns or operates power generation assets around the world, from Europe to the Caribbean and from Africa to Latin America.

“The company also ticks another important box, in that it has no plans to work on any new coal-fired projects. That should please those investors who are of an ethical bent, especially as around one third 6,310 megawatt (mW) installed base already comes from solar, wind and other forms of renewable energy.

“More specifically, ContourGlobal’s cash flow easily covered both its interest bills and dividends. Utilities can bear lofty debt burdens more easily than most, thanks to the relatively stable demand they enjoy and healthy operating margins and cash flow they generate. In addition, much of the debt is held at the local project level, and around four-fifths of the borrowings are fixed rate, to offer some near-term protection from higher borrowing costs.

“Ultimately it will be lowly valuation, as evidenced by the fat yield, the juicy cash flow and index-linked nature of the contracts which generate four-fifths of earnings before interest, taxes, depreciation and amortisation (EBITDA) that will have attracted KKR.

“And that lowly valuation was the result of many investors preferring to participate in the dash for growth stocks and more speculative counters in 2019, 2020 and 2021.

“We have been here before.

“In his seminal 1934 tome, Security Analysis, Benjamin Graham, the mentor of Warren Buffett, noted a similar trend in the lead up to the 1929 Wall Street Crash when he wrote of how a lot of investors followed the wrong crowd, with terrible consequences:

‘During the latter stage of the bull market culminating in 1929, the public acquired a completely different attitude towards the investment merits of common stocks… Why did the investing public turn its attention from dividends, from asset values, and from average earnings to transfer it almost exclusively to the earnings trend, i.e. to the changes in earnings expected in the future? The answer was, first, that the records of the past were proving an undependable guide to investment; and, second, that the rewards offered by the future had become irresistibly alluring.’

“Let us hope that the frenzy of 2019-2021 does not lead to a similar accident this time. But the KKR approach for ContourGlobal at least shows that the disciplines of studying cash flows, balance sheets and valuations can pay off handsomely for those who do their research and are brave enough to go against the flow – the shares bottomed at 144p in spring 2020.”