“We have already had four changes to the FTSE 100’s make-up in 2019, and further changes look likely at the reshuffle that will take place based on stock market valuations at the close on Tuesday 3 September. Marks & Spencer’s modest £3.5 billion stock market valuation means it looks doomed to automatic relegation and that would end the retailer’s membership of the index, which dates right back to the launch of the FTSE 100 in 1984,” says Russ Mould, AJ Bell Investment Director.

“Centrica and Direct Line could join it in the FTSE 250 as Polymetal, Hikma and Meggitt could have market caps which merit automatic promotion, at around the £4.7 billion mark, although Kingfisher is also in the relegation mix, with even Sainsbury not too far away.

“But it is M&S that will really catch the eye if it slips through the trapdoor. The management team of Archie Norman and Steve Rowe continue to insist that the company is changing quickly and the all of the right pieces are in now in place to halt and then reverse a steady erosion of the company’s annual profits since 2011 (or even 2007 when pre-tax profit reached £1.1 billion). 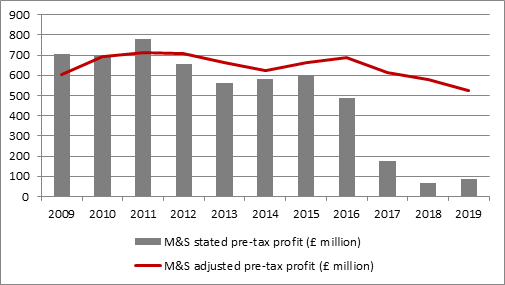 “M&S is one of just 28 original members that are still in the FTSE 100, 35 years after its launch. Sixteen, including M&S, are still there under the same name while 12 more are present under a different identity and a further 13 are now part of another FTSE 100 constituent following merger and acquisition activity. M&S’ demotion would therefore leave just 27 of the original 100 members in the index in a similar form, with the same or a new name, to show just how hard it is for companies to stay at the top for very long.

•    Polymetal is on the verge of a third stint in the FTSE100, following a two-year stint in 2011-2013 and vey short-lived tenure in late 2016. A surge in the gold price to around $1,525 an ounce, amid uncertainty over global trade and growth and the potential efficacy of central banks’ policy response, is a key reason behind the company’s return to favour, although the company’s ramp-up of output at the Kyzyl mine is helping it make the most of gold’s renaissance.

July’s trading update revealed that the firm was on track to meet its annual production target of 1.55 million ounces of gold or gold equivalent (including silver), against 1.56 million last year, with an all-in sustaining cost of between $800-850 an ounce, a reduction compared to $861 in 2018.

That cost base means Polymetal is well placed to benefit from any further increase in gold prices although sceptics may point out that the firm’s first spell in the FTSE 100 began in December 2011, just after the gold price had actually peaked at just shy of $1,800 an ounce, a level which it has failed to recapture (thus far).

•    Hikma Pharmaceuticals is poised to return to the FTSE 100 following its relegation in June. That slide into the FTSE 250 was the result of the company’s failure to meet analysts’ forecasts with its full-year results in March. The shortfall came from the injectables operation, which represents around 40% of the company’s sales, compared to 30% from each of branded drugs and generic treatments. Hikma had been driving injectables sales through new product launches and increased production of opioid painkillers as the US suffered a shortage of such products. Guidance for 2019’s sales of generic drugs also disappointed.

This would be Hikma’s fourth promotion to the UK’s corporate top flight, following March 2015, June 2016 and December 2016. However, the first two stays lasted just a year and the last one a mere six months.

•    Meggitt would be returning to the FTSE 100 after an absence of almost four years. The aerospace and defence expert was relegated in December 2015, having entered the index for the first time ever in October 2011.

Shares in the Bournemouth-headquartered company are trading at an all-time high as the high-end components maker is fighting back from a period of relatively weak financial performance (profits were basically flat between 2014 and 2018 even as revenues rose by a third).

Meggitt has overhauled its divisional structure and started to benefit from an increase in US military expenditure in particular (so at least someone is doing well out of the Trump Presidency).

The company has seen more demand for training equipment and retrofit fuel tanks for the F/A Hornet US fighter jet in particular, although strong aftermarket sales mean that the civil division is doing well, too. Meggitt raised revenue growth guidance for 2019 at sides of the business alongside July’s trading update.

•    The combination of a grinding multi-year decline in profits, as a result of an equally painful and consistent decline in like-for-like sales in both Food and General Merchandise, a dividend cut and investor scepticism regarding the plan to buy 50% of a food delivery joint venture with Ocado all leave Marks & Spencer facing ejection from the FTSE 100 for the very first time.

May’s full-year results revealed a ninth consecutive quarter of like-for-like sales decline in Food and Clothing (and therefore at group level) as investors are clearly becoming impatient with chief executive Steve Rowe, who took over in April 2016 and has since sanctioned £1.4 billion in restructuring, store closures and other exceptional costs.

Rowe himself appointed Jill McDonald as the head of the clothing arm so her removal after less than two years does not look good and Ocado’s inability to make money from food delivery and apparent willingness to move on from that business may explain why only 85% of the rights were taken up when M&S tapped shareholders for £600 million in a 1-for-5 deal in June.

•    Centrica has been a FTSE 100 member since it was spun out of British Gas in 1997 but the firm’s share price has never recovered by November 2017’s shock profit warning and a third dividend cut this decade (alongside July’s interims) may have been the final straw – it certainly nailed the lid on Iain Conn’s tenure as chief executive, as he has announced his departure in 2020.

Conn had chosen to defend the 12p-a-share dividend in 2016, 2017 and 2018, even as earnings cover got progressively thinner and profits and cash flow came under pressure. He finally bowed the inevitable this year, with the announcement of a reduction in the annual distribution to 5p a share, as he cited the impact of regulation on profits and increased demands on cash flow from investing in the core business and topping up the pension fund.

Centrica’s shares trade at levels last seen shortly after shares began trading for the first time, some 22 years ago.

•    Direct Line made it into the FTSE 100 in autumn 2014, just two years after it was spun out of Royal Bank of Scotland and the stock has been ever-present in the index since its initial promotion.

However, the shares have slumped to their lowest level since late 2014, thanks to investors’ concerns over claims inflation and increased car repair costs, the Government’s latest intervention in the Ogden rate (set at minus 0.25% by the Lord Chancellor in July) and the threat of regulatory intervention on pricing. Although the
Financial Conduct Authority and Competition and Markets Authority have both launched probes into what the FCA called the “excessive difference between premiums charged to new customers and those renewing.”

New CEO Penny James, who took over from Paul Geddes in June, has plenty to think about and the consensus analysts’ earnings per share forecast calls for a 16% drop in 2019 and a further 2% slide in 2020.

Analysts are still looking for another healthy hike in the dividend this year and the shares offer a yield north of 10% - enough to make them the fifth-highest yielding stock in the FTSE 100 index. That may reflect scepticism about the accuracy of the analysts’ forecast of a 28.4p-a-share dividend, compared to 21p last year.

Appendix: How promotion and relegation are assessed

•    All of the major FTSE indices are reviewed on a quarterly basis. They are set according to share prices from the close of business on the Tuesday before the first Friday of the review month (in this case 3 September). The changes come into effect in mid-to-late September.

•    In general, a stock will be promoted into the FTSE100 at the quarterly review if it rises to 90th position, or above (by market capitalisation) and a stock will be demoted if it falls to 111th (by market value), providing it fulfils the other criteria, such as free float and a presence on the Main Market.