“Lloyds is joining RBS and CYBG in admitting that it needs to set aside more money to cover a final rush of PPI compensation claims and – like CYBG – the provisions look set to hit the bank’s plans to return capital to shareholders,” says Russ Mould, AJ Bell Investment Director.

“Lloyds has stated that it will suspend its share buyback programme with some £600 million still to go, owing to the extra £1.2 billion to £1.8 billion in provisions to cover possible payments to customers in recompense for mis-sold PPI. 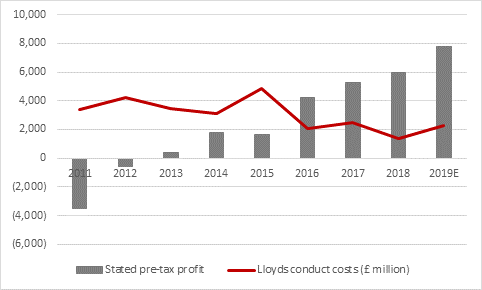 “The extra costs do knock the investment case for Lloyds, as they hit return on equity, hamper the bank’s plans to build up its capital buffers and therefore its ability to distribute spare cash once regulators are satisfied that it has sufficient financial ammunition to withstand any future crisis.

“Lloyds has today admitted that return on tangible equity for 2019 will not reach its 12% target and that the plan to boost its key regulatory capital ratio by 1.7 to 2.0 percentage points will also go astray in 2019.

“A knock-on effect is this crimps Lloyds ability to distribute spare cash once regulators are satisfied that it has sufficient financial ammunition to withstand any future crisis.

“The UK is a mature, heavily-banked market with relatively limited growth prospects, tight regulation and fierce competition. As such, investors look be looking to the bank for income rather than growth for the bulk of their total shareholder return and Lloyds’ plans to supplement a chunky dividend with share buybacks fits the bill here.

“Consensus analysts’ forecasts for a dividend of 3.42p a share in 2019, up from 3.21p last year, equates to a 7% dividend yield. The completion of the share buyback scheme would have returned another 3%-plus of the company’s market cap in cash, making for a total cash return equivalent to 10% of the market value in one year and 50% over just five – enough to keep most income-focused investors interested. 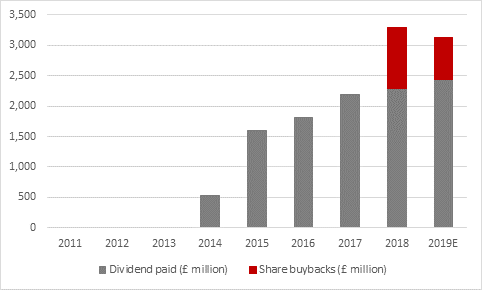 “The good news is that this should at least see Lloyds through PPI and that no further hits can come from it. In addition, the shares have already performed poorly, thanks to fears over not just PPI, but the soggy state of the UK economy and pressure on loan margins from falling interest rates and competition in the mortgage market.

“Analysts will have to tweak their forecasts for earnings and book value per share after today’s announcement but before any downgrades Lloyds was trading on barely one times tangible net asset value per share and on a price/earnings ratio (6.5 times) that was lower than its dividend yield (7.0%).

“When the yield is higher than the PE that can be the stock market’s polite way of saying it thinks the forecasts are too optimistic – and so it may be proving today – but Lloyds’ shares are falling by an awful lot less than CYBG’s did last week, to suggest the lowly valuation and the poor share price performance did mean that investors were already braced for bad news.”