PPI comes back to bite RBS one final time

“Just when investors were wondering whether the worst of RBS’ regulatory woes were behind it, the bank has confirmed that a final rush of PPI claims applications ahead of the 29 August deadline has forced it to take another big provision to cover compensation claims,” says Russ Mould, AJ Bell Investment Director. “The additional cost of £600 million to £900 million will take the total set aside to meet claims to between £5.9 billion and £6.2 billion and take the total that RBS has paid out to settle regulatory and conduct issues to around £22 billion since 2011.” 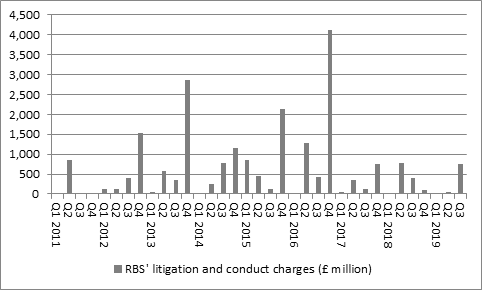 “Investors will be disappointed as the bank only booked £65 million of litigation and conduct charges in the first half of the year. That helped to boost stated pre-tax profit to £2.7 billion in the first six months of 2019 compared to £1.8 billion a year ago.

“However they may not be that surprised. The FCA pushed the final PPI claims deadline very hard and a final rush of customer filings was always a possibility. That may help to explain why RBS shares were trading at such a big discount to their stated tangible asset value per share of 290p – although wider concerns over the state of the UK economy, an increase in bad loan impairments across all of the major banks (albeit from low levels) and pressure on lending margins as central banks start to cut rather than hike interest rates are also a factor here.

“RBS shares therefore continue to look cheap but they also continue to sag, even as the firm unveils more generous dividend and special dividend payments.

“Fears of a recession mean that investors are becoming concerned over further loan impairments and a weakening of profitability, just as the bank looks to be over the worst in terms of its conduct costs and restructuring charges (even allowing for today’s final PPI hit.

“Yet central banks’ attempted salve to those economic worries – namely lower interest rates – is squeezing lending margins as bond yields tumble and yield curves flatten. That could put major pressure on banks’ profits – European bank shares are trading at 1993 levels thanks to a similar scenario as the ECB looks to take rates deeper into negative territory – and at the moment it rather feels like the banks are stuck between a rock and a hard place. 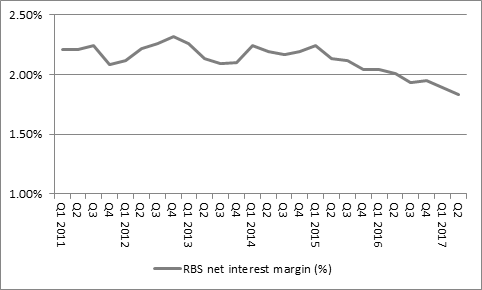 “For the banks to perform some clarity on Brexit would help but they really need a healthy economy and a steep yield curve to thrive and for the moment neither of those conditions appear to be in place, so any deep-value hunters fishing around in the banking sector may need to be very, very patient.”