The West would be ecstatic if its economies were to suddenly start growing by nearly 7% a year but the second-quarter increase of 6.9% generated by China is the norm for the Middle Kingdom and this figure should help to reassure those who are worried that Beijing’s gathering debt mountain mean it could one day suffer a hard landing.
17 July 2017
Share:

Boosted by both fiscal and monetary stimulus in 2016, China remains on track to meet the 6.5% to 7.0% economic growth target laid down by the ruling Communist Party. Moreover, its currency, the renminbi, has rallied against the dollar from RMB 6.96 to RMB 6.77 this year, to confound those who were convinced that a devaluation was imminent.

“Both the economy and the currency should help to ease investors’ fears that China is going to the source of a further growth and financial market fright, after the volatility such worries caused in August 2015 and early 2016,” says AJ Bell Investment Director Russ Mould.

“However, this does not mean that everyone can let down their guard, for several reasons. After all, China is a massive country yet it publishes one estimate for GDP and does it faster than the UK or US for example – both of which then revise their initial figure at least twice – so cynics may be tempted to greet Beijing’s published figures with some scepticism, especially as the recent growth rates have sat comfortably within the authorities’ target range: 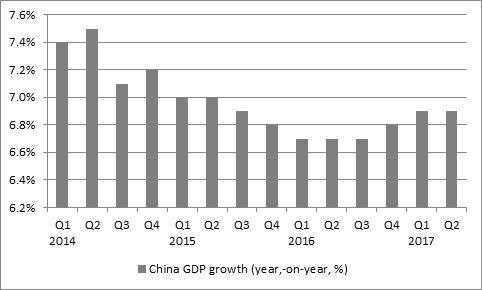 “Xi Jinping looks like a shoo-in for a second term as General Secretary of the Party and President of the Republic but he will tread carefully, since the Party’s grip on power rests on the economy and jobs.

“Last year’s pump-priming shows how nervous the Party gets is growth looks like it could wobble but this means China could end up being a bit stop-start, as the authorities look to tackle corruption, debt and financial excess on the one hand but keep growth ticking over on the other.

“This is a trickier balancing act than it looks, with aggregate debt-to-GDP numbers nearing 250%, even if a lot of the borrowing rests with state-owned enterprises, half-way between the Government itself and corporations.

“For all of the reassurance provided by the headline data, it is interesting to see that local investors have their doubts. Since the huge surge and then correction seen in the Shanghai Composite index in 2015, Chinese stocks have gone nowhere fast, to remind investors that macroeconomics must be kept in context when it comes to building a portfolio and selecting investments – in the end it is profits, cash flow and dividends that drive individual company share prices and those share prices drive the index bottom up.” 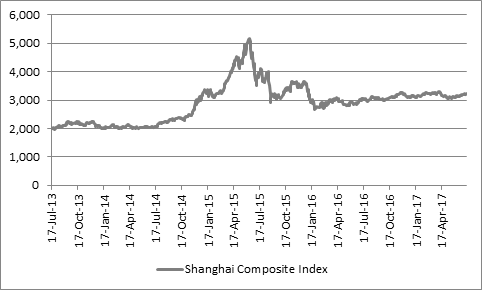 “Investors in China-exposed stocks – such as the miners, for example – may therefore still need to tread carefully going forward, as on balance it still feels like China is likely to slow down at the margin, given its reliance on debt, and this could have an effect upon demand for commodities and raw materials.”