“At the after-hours trading close of $146 a share, Apple’s total market valuation is now just under $700 billion after the trading alert which cuts the company’s earnings guidance for its fiscal first quarter by some 10%.

Source: Company accounts. *Based on mid-point of prior guidance.

“This is all a far cry from 3 October when the company’s market capitalisation reached $1.12 trillion and Apple has lost 38% of its value since that high point. 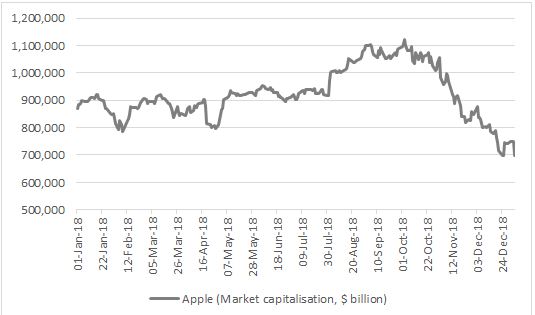 “Bulls of the stock will point out that even this downgraded guidance still means earnings per share (EPS) are forecast to grow by some 7% year-on-year, but all of that increase comes from a drop in the tax charge and a lower share count following the company’s massive share buyback scheme.

“Sales and operating profit – the best signs of the company’s ultimate health – are both expected to be down year-on-year, the first such declines in two years and the drops suffered in Apple’s fiscal first quarter for 2017 (Q4 2016 on a calendar basis). 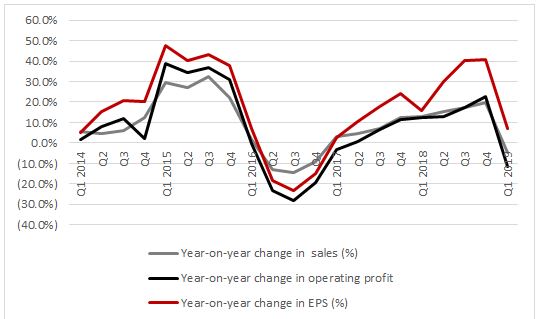 “Boss Tim Cook has largely pinned the profit shortfall on China, and concerns over President Trump’s trade policies and desire to put America first. But the statement also blames a stronger dollar, weakness in other emerging markets and also slower-than-expected iPhone upgrade sales in developed markets, which may be the result of Cook’s strategy to jack up prices for the latest iPhone models.

“As such, China alone cannot be blamed and Apple’s profit slide, couple with the sharp share price drop, raises three issues which investors must now address, with regard to Apple but also stock markets more generally.

1.    Do share buybacks really work?
On 1 May 2018, Apple announced plans for a $100 billion share buyback plan. The shares ended that day at $169. They fell to $146 in after-hours trading yesterday even though Apple has spent (and some would say ‘blown’) $72.7 billion buying back stock in the past 12 months.

With Apple’s shares now trading at a 12-month low this again raises the question of whether share buybacks really do provide value to investors.

Apple still has $237 billion in cash but it has piled up $114 billion in debt to fund a lot of the buybacks and you do wonder what the company could have done with the money instead, given ongoing competitive pressure in the smartphone market and Apple’s ongoing reliance on the iPhone, an 11-year old product.

Apple is already onto the fourth-generation version of its Watch and is seeing its AirBuds sell strongly but the Californian giant has yet to come up with a product (or service) that is big enough to move the profit dial. Last year’s $14 billion research and development bill represented just 5.3% of sales, low for a tech company, and paled next to the $73 billion buyback investment.

In the long term it is product engineering that matters, not financial engineering. 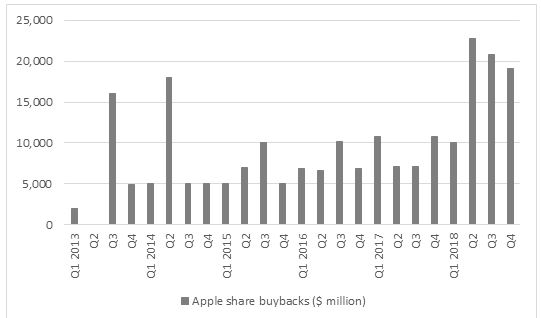 2.    Are momentum and growth-oriented strategies in trouble (and does this mean value is poised to make a comeback?)

Like any investment strategy, buying on momentum, in the form of following a rising share price or companies where earnings estimates continue to rise, is a portfolio plan that works well – until it doesn’t.

As soon as the upgrades stop or the share price rolls over, there can be a sudden, panicky rush for the exits, as anyone who piled into Apple amid the summer hype over its $1 trillion market cap has now found out to their considerable cost.

Tim Cook and team now need to get sales and operating profit growing again. Apple overcame profit drops in 2013 and 2016 so a hat-trick is perfectly possible if the firm gets a new product cycle right.

Investors are clearly reserving judgement for now although they might start to wonder whether Apple is now more of a value stock than a growth stock anyway.

At $146, these figures leave the company on 12.3 times and 11 times forward earnings with a dividend yield of some 2% and a balance sheet that still has $123 billion of net cash, compared to its $700 billion market cap. That degree of solidity and Apple’s robust cash flow may tempt in some value seekers, given the relatively lowly valuation, especially compared to the other FAANG stocks – Facebook trades on more than 20 times forward earnings, Alphabet (Google’s parent) just under 40 times, Netflix at 65 times and Amazon more than 75 times.

At least Apple’s valuation may therefore provide some degree of downside protection, at least relative to the others, and that is where value-based strategies come into own, relative to momentum-based strategies – they focus as much on trying not to lose money as much as they upon making it, a discipline which may come back into fashion if wider markets remain volatile.

3.    Does the loss of momentum in the FAANG stocks suggest there is further trouble ahead for stock markets?

There is an old market rule which says that when the individual stocks or sectors that took the broader market indices higher start to tire and roll over then everyone needs to be careful. Such a loss of momentum (and by implication investors’ faith) means that in a best case it can be very hard for the broader indices or, in a worst case, even herald a substantial downdraft.

Such a loss of momentum (and by implication investors’ faith) in prior market leaders can, in a best case, make it very hard for the broader indices to make fresh gains and, in a worst case, even herald a substantial downdraft.

Tech stock investors will remember this all too well after their experiences in the late 1990s and early 2000s.

The NASDAQ Composite index rolled over before the broader US stock indices did, just as the bursting of the technology, media and telecoms bubble sowed the seeds of a wider equity market downturn in early 2000. A three-year bear market ensued in the USA (and the UK, Europe and Asia, for that matter). 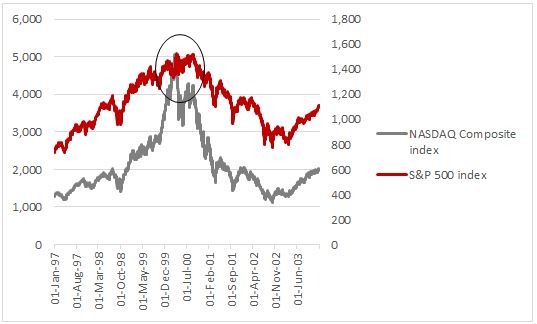 During the 2003 to 2007 it was financial stocks, and particularly banks, that made the running. Lo and behold they peaked in 2006, as someone, somewhere sensed that too much money was being loaned in too free-and-easy a way and that rising interest rates would make things a lot more difficult for borrowers and lenders alike. Global stock indices hit the wall in mid-2007 and brutal 21-month market slump followed. 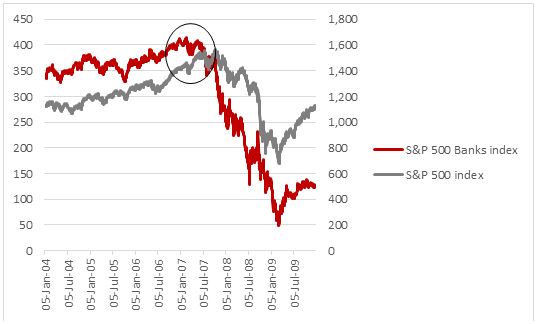 The past is not guaranteed to repeat itself and the FAANGs’ current loss of momentum may not be a warning that the bull market is about to end.

But their swoon may mean that investors should at least consider how much risk they are taking in the portfolio, especially if they have substantial exposure to richly-valued growth and momentum plays via their preferred active and passive funds, or even via direct investment in the stocks themselves.