“You can tell a share price is in trouble when even a drop 25% is hard to spot on the chart and Snap’s pre-market plunge is just such an example,” says AJ Bell Investment Director Russ Mould. “The self-styled camera company’s stock now trades below the March 2017 flotation price of $17 and is down by some 80% from its September 2021 peak after a profit warning for the second quarter that cites a deterioration in the economic environment.

“The alert, which steers revenues and the company’s preferred profit metric of adjusted earnings before interest, taxes, depreciation and amortisation (EBITDA) for the second quarter below the bottom end of the guidance given for the period alongside April’s first-quarter results, also raises fresh fears that Apple’s new privacy and data protection guidelines are hurting Snap’s business model.

“Apple’s App Tracking Transparency requirements means app developers must ask for permission to access a device user’s unique tracking number. If the user elects to opt-out when given the chance to do so by the pop up then the app provider must continue to offer its service, but without the targeted, tailored advertising. 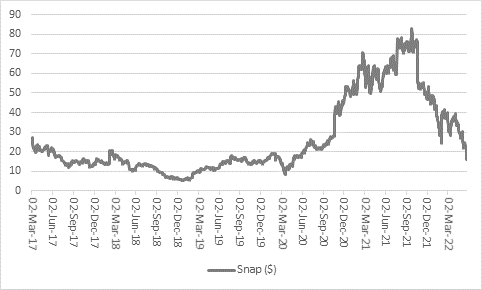 “Whether Snap’s problems lie with the economy weighing on customers’ willingness to advertise, and or their growing concerns as to whether they will get an adequate return on that spending, remains to be seen.

“But what is clear is that Snap is not having much joy in turning new users into more profits.

“The firm went public in March 2017. From the second quarter of that year onwards, daily average users have surged to 332 million from 166 million and quarterly revenues to $1.1 billion from $182 million. 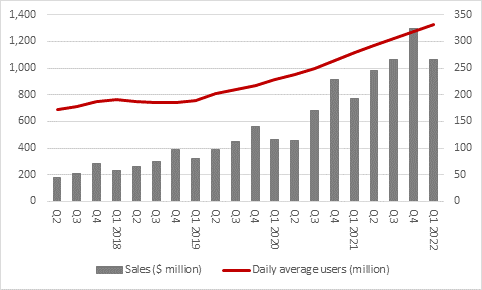 “But the good news ends there. Snap says it is making a profit, but it does so using that adjusted EBITDA metric, which excludes half a dozen items from the profit and loss account, the largest of which is stock-based compensation for staff. It is hard to see what stock-based compensation is other than pay, so it is hard to see why that should be scrubbed from calculations of profitability (or otherwise).

“Worse still, in its 20 quarters as a publicly listed firm, Snap is yet to make a profit at the operating level and can point to just one quarterly net profit.

“Since the second quarter of March 2017, Snap may have generated $10 billion in revenues, but it has turned that into an aggregate net loss of $5 billion. 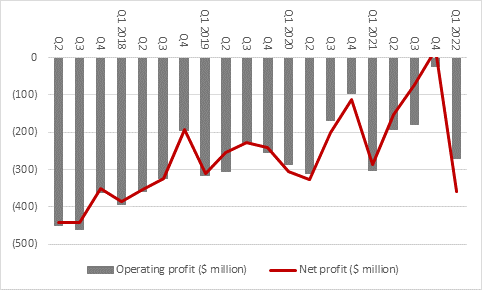 “How that supports a $26 billion market capitalisation, even after the sharp pre-market falls, could be seen as a bit of a mystery.

“Snap is therefore joining a long and growing list – from Meta Platforms to Peloton, from Cazoo to Zoom Video Communications, from Robin Hood to Snowflake – of firms that have grown their user base and revenues but then failed to generate anything like the profits and cashflow (or even any profits and cash flow) required to sustain huge market capitalisations.

“Tighter monetary policy, meaning less and more expensive fun money for investors, and a series of share price crashes are dampening appetite for this sort of stock. We have gone from an environment of low growth, low rates and low inflation, where any firm could grow on a secular basis was highly prized, to one were higher inflation means higher rates and also that growth is easier to find, at least in nominal terms.

“That leads them toward cyclicals and value names, especially as paying lower multiples of sales, earnings and book value, and possibly grabbing dividends in the meantime, offers more downside protection that high-flyers with no profits or cash flow or both. Snap is just the latest example of how even the slightest earnings disappointment can lead to hefty share price falls and we seem to be moving into the stage of the cycle where investors are more worried about return of their capital then return on their capital.”