“Vodafone ended its dividend growth streak with a cut and now SSE has done the same, meaning that just 26 FTSE 100 firms have managed to increase their annual shareholder distribution every year for the last decade, including Burberry, which joined this exclusive club just last week,” says Russ Mould, AJ Bell Investment Director. “SSE’s annual dividend growth streak stretched all the way back to 1992, so chief executive Alistair Philips-Davies and the board will not have taken this decision lightly, but changes to the group structure and tough trading conditions mean that it looks the right thing to do. 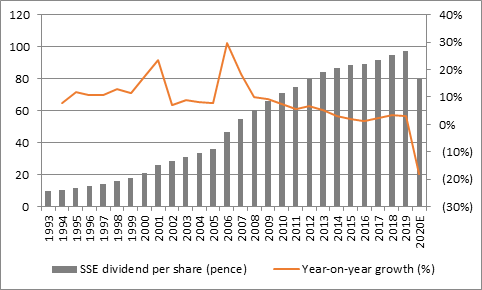 “Today’s mild profit warning – the utility’s third trading alert in the past year – hints at the pressure that was building on the pay-out.

“Chief executive Alistair Phillips-Davies has forecast an improvement in underlying profits but cautions that progress will be restrained by the timing of profits in Electricity Networks and effect of hedging at the Renewables operation, which will limit the price received for the energy generated at levels below prevailing market rates.

“This follows last year’s profit setback when the hot, calm summer hit SSE’s wind business and forced the firm to buy power in the open market to compensate for the renewables shortfall. That drove the Energy Management unit into loss. 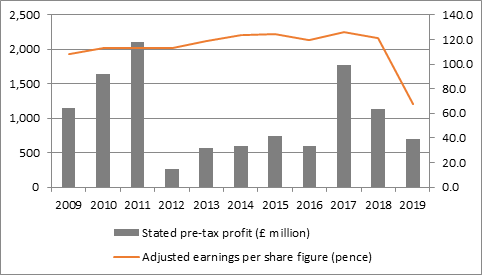 “All eyes are now on the company’s plan to demerge its retail energy supply business, following the failure of the plan to merge that with Innogy’s nPower arm, and how the dividend is spread across the two future parts of the business, retail and then the core regulated networks and renewables operation.

“At the moment, the projected 80p-per-share payment for the year to March 2020 equates to a still-meaty dividend yield of 7.8%, enough to leave SSE as the eleventh-highest yielding stock in the FTSE 100.

“Investors must now ask themselves whether that is enough compensation for the risks associated with owning the shares, given the regulatory and competitive challenges that face the company, as well as the risk that politics could pose, should a Labour Government be elected, given its antipathy to utilities paying out large dividends to shareholders. SSE’s projected 80p-per-share dividend still equates to a total payment of more than £800 million of the coming year.”