“Perhaps it is down to concerns over the expiry of the stamp duty tax break in October, or worries over an increasing reliance on Help-to-Buy, or the potential impact of the proposed April 2022 launch of the Residential Property Developer Tax, but investors do not seem unduly moved by Barratt Developments’ strong full-year results,” says AJ Bell Investment Director Russ Mould. “Perhaps it is just down to the absence of any incremental good news, but the shares are not responding to publication of healthy profits, a net cash balance sheet and a dividend that equates to a historic yield of 4%.

“The FTSE housebuilder expects to drive volume completions back to 2019’s pre-pandemic levels in the year to June 2022 and is a likely beneficiary of further house price increases, at least if Nationwide’s latest data is concerned. That said, some investors may be fretting that the current surge in prices in unsustainable and the result of the stamp duty tax break, especially considering the fall in net private reservations through July and August, even if the UK housing market does still seem to be suffering from a shortage of supply. In addition, the pandemic could yet bolster the population’s desire for larger, suburban dwellings with gardens and underpin demand for some time to come. 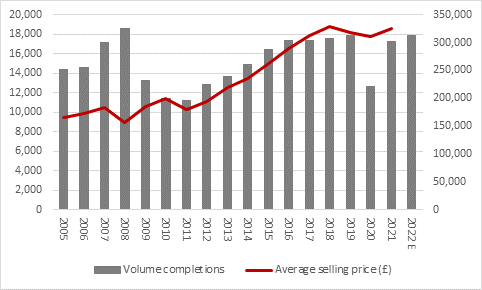 “Further price increases would help the builder offset increases in input costs which the company says are proving persistent (despite central bankers’ insistence to the contrary. Barratt’s results presentation flags its expectation that input costs will rise by 4% to 5% in the year to June 2022.

“However, price increases raise the question of affordability. The stamp duty break has helped here and so has Help-to-Buy.

“The percentage of buyers who used one version or another of the Help-to-Buy scheme reached 38% in the year just ended, up from 33% the year before, a record high since the introduction of the support programme by Chancellor George Osborne in April 2013. The latest version of Help-to-Buy, the equity loan scheme, runs until March 2023 and shareholders can be forgiven nervous for wondering what will happen after then if so, many people need this financial assistance to get on the housing ladder – even if the chances of yet another extension are probably quite high, given the political fall-out for any minister or Government which pulls the rug from under the housing market, accidentally or otherwise. 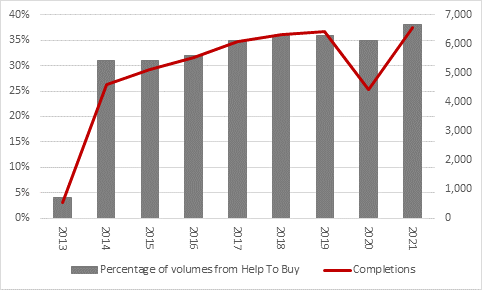 “Shareholders will also be keeping a wary eye on the costs associated with cladding remediation of previously-constructed sites, notably Citiscape in Croydon. The bill went up by a further £81.9 million in the year to June 2021, taking the total to £184 million since 2017, and management has flagged that the year to June 2022 could see further costs of £40 to £50 million, if its guidance for ‘adjusted items’ in the results presentation is any guide.

“The fall-out from the cladding crisis – some would say scandal – could yet make its presence felt in another way, with the possible launch in April 2022 of the Residential Property Developers’ Tax (RPDT). Earlier this year the Government consulted on this levy, designed to raise some £2 billion over a 10-year period to raise money for the replacement of cladding on high-rise buildings, although its exact nature is yet to be disclosed and we may only get the details with the next Budget.

“And yet for all of these concerns, Barratt remains in rude health. It is serving an undersupplied market, is looking to drive completions toward its annual target of 20,000 and generates healthy profit margins. 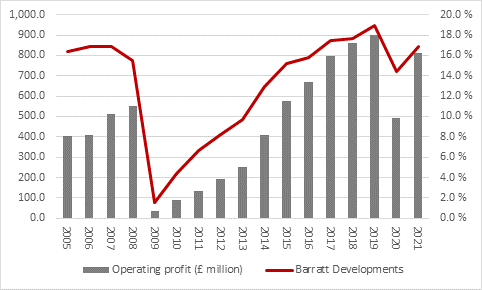 “Better still, it has a net cash balance sheet, so it can continue to invest in fresh land plots to lay the foundations for future growth. 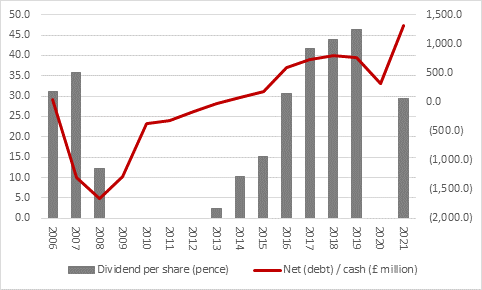 The buying of land at the right price at the right time in the cycle is just as important to a builder as efficiently making a good-quality house, when it comes to profit margins, and Barratt expects to spend around £1 billion in the year to June 2022 to add to its land bank of 77,642. 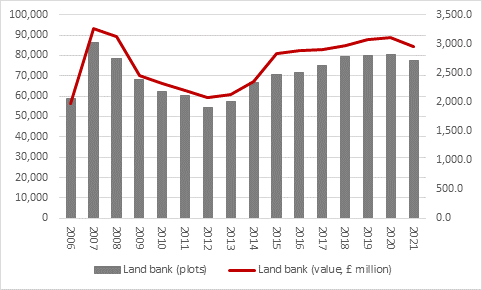 “Ultimately, however, it is the valuation paid to access a company’s cashflows and profit that determines long-term investment returns. Barratt trades at around 1.5 times historic book – or net asset value – per share, smack in the middle of the range that some analysts use to assess building stocks. This rule of thumb suggests that house builders which trade close to one times book value or below may be cheap and those that trade at two times and above may be expensive.

“The absence of any incrementally positive news today may therefore leave investors with few reasons to push the valuation any higher, at least for now.”