Three reasons why financial markets do not want to see tariffs

“When Donald Trump was running for President, financial markets were wary of him, not least because of his calls for tariffs and protectionist policies. For a while it looked like that had all been forgotten but the President’s latest threats about more tariffs from 1 September is prompting a rally in bonds and gold and a fall in equity markets to suggest that investors are now worrying about the downside of the President’s trade policies,” says Russ Mould, AJ Bell Investment Director. “This is understandable. History shows that no-one wins a trade war and three factors in particular could further impact US and global share prices, if America’s commercial partners decide to retaliate, through tariffs, embargoes or currency devaluations of their own, and global trade flows slow.

1.    The lessons of Smoot-Hawley.
Economists agree on very few things but one of them is that 1930 Smoot-Hawley Tariff Act worsened what was already a difficult situation, contributing to the Great Depression of the 1930s.  The bill introduced by Senators Reed Smoot and Willis Hawley slapped tariffs on over 20,000 types of imported goods. Key trading partners responded and after initial gains in industrial output and employment, exports and imports started to shrink to the marked detriment of both and therefore wider US and global economic output.

2.    Inflation. The President claims that American workers will win as manufacturing jobs are brought back onshore in the US, but they could still be hit in the pocket if the price of imported goods goes up, nudging inflation higher, even if the plan is to let increased domestic output compensate for the drop in imported materials. Now that sports shoes and smartphones may be subject to tariffs from 1 September it will be interesting to see if this has a knock-on effect on pricing and therefore potentially demand.

3.    The dollar. The USA runs a trade deficit for the simple reason that America consumes more than it makes, so it has to import more goods than it sells, in turn spending more dollars than it earns. It is that simple. If President Trump succeeds in his plan to lessen or erode the trade deficit, then it seems logical to expect an increase in the value of the greenback as fewer dollars are exchanged for overseas goods and supply the US currency is held in check.

For all of the concerns over what the President’s policies may mean, the dollar – as benchmarked by the DXY index, or ‘Dixie’, is up for year at around 97.5.

Perverse as it may seem, a strong dollar has tended to be bad for global markets.

Since President Richard M. Nixon and Treasury Secretary John Connally smashed up the Bretton Woods agreement in 1971, withdrawing America from the gold standard and ushering in the era of free-floating currencies, the dollar has enjoyed two huge bull runs.

The first ran from the mid-1970s to 1985, as then Federal Reserve Chair Paul Volcker jacked interest rates up to 19% so he could crush inflation. That period included the 1982 Mexican debt crisis and considerable financial market volatility and it took September 1985’s Plaza Accord amongst (what was then) the G5 to officially devalue the greenback against the yen and deutschmark to halt its progress.

The second ran from 1993 to 2000, a period which included another period of emerging market instability in particular, with the 1994 Mexican peso devaluation (the so-called ‘Tequila sunset’) and the 1997-98 Asian and Russian debt crises. A Fed-backed bail-out of the LTCM hedge fund helped to smooth that over and the dollar’s rise was eventually checked by a recession and interest rate cuts in 2001-03.

Stock markets, and especially emerging markets, are therefore always wary of a strong dollar as a bouncy buck is inherently deflationary: a strong greenback increases the cost for non-dollar nations of funding their dollar-denominated debts and it makes dollar-priced commodities more expensive in local currency terms. 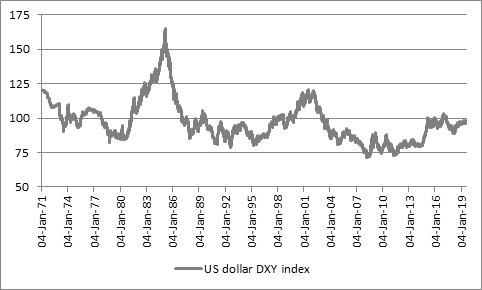 “Thus far markets are done their best to avoid thinking about such a possible chain of events. The President’s honeyed tweets in the wake of the G20 meetings in Buenos Aires last November and Osaka in June stoked hopes that a deal between the US and China was within reach, while a further crutch upon which share prices have relying is the US Federal Reserve.

“One logical outcome of tariffs, and thus higher prices, is inflation – and if inflation starts to accelerate you would normally expect the Fed to hike interest rates. But this time the opposite is happening, as the US central bank seems happy to risk inflation running a little hot so it can protect growth.

“As a result, investors are again adopting the mantra of ‘Don’t Fight the Fed,’ in the view that lower interest rates will support economic growth, corporate earnings and cash flows and therefore share prices.

“Yet there is a danger that investors expect too much of the Fed’s bag of policy tricks. Granted, the central bank has responded to trade fears with its first interest rate cut in a decade. 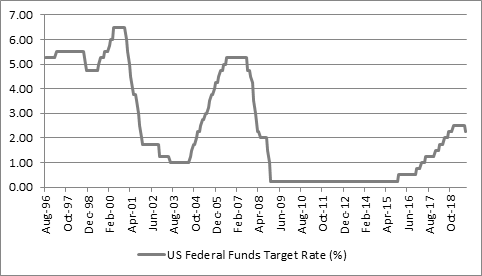 “But increasingly frantic Fed rate-cutting in 2001 and 2007 did nothing to stop either a recession or an equity bear market.  It took nearly three years for the financial patient to start to respond, so if the tariff dispute does hit global trade and lead to a global recession then even Fed rate cuts may not be enough to support stock markets, at least immediately, especially after a ten-year bull run.