What does the bear market in mining stocks mean for the FTSE 100?

“Oil, gas and energy prices are grabbing all of the headlines as they rise but investors will be fretting over industrial metal prices, albeit for the opposite reason, because they are falling. The FTSE All-Share’s Industrial Metals and Mining sector is down by more than a fifth from its May high – and that is technically bear market territory,” says AJ Bell Investment Director Russ Mould. 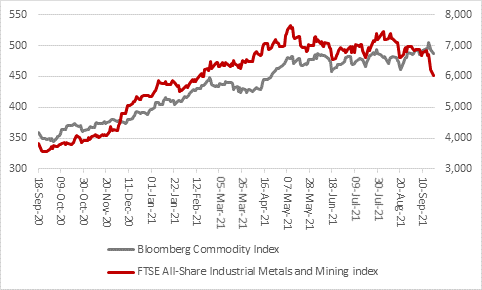 “Central bankers may be pleased to see the metals in retreat, as that fits with their narrative that the recent spike in prices is transitory and will not lead to a sustained bout of inflation as a result.

“But weakness in iron ore and copper could simply hint at another problem, namely the fragile nature of the global economic recovery. Data from China, Europe, the UK and USA remains mixed and China’s crackdown on speculation in favour of common prosperity could mean the world’s second largest economy can no longer be relied upon to fuel global growth.

“The Communist Party’s notable lack of action to save Evergrande, and its lenders and bondholders, at least thus far, tallies with its apparent desire to determine what it productive finance and what is unproductive finance. Evergrande and property speculation appear to be in the ‘unproductive’ bucket (along with designing video games and gambling in Macau, along with other perceived end-results such as overseas stock market listings and conspicuous consumption). This could mean a slowdown in building activity and thus demand for copper and iron ore – a key raw material for the manufacture of steel – could start to falter. 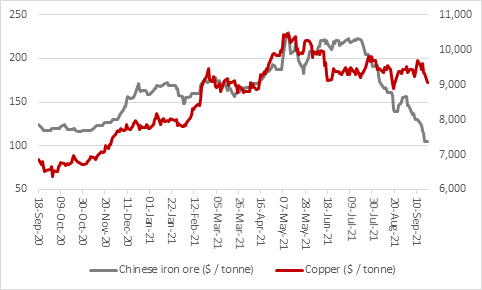 “The ramifications of this do not stop at China’s borders, especially in globally interconnected financial markets. The UK’s mining stocks are on the slide as a result, since iron ore and copper were huge earners for Rio Tinto, BHP, Glencore, Antofagasta and Anglo American in the first half of the year.

“Weaker industrial metals prices may therefore be partly responsible for the FTSE 100’s failure to make much progress over the summer (even allowing for the Delta variant and gathering concerns over supply chain bottlenecks, inflation and the availability of labour and finished goods).

“Mining is expected to be the biggest sector within the FTSE 100 in terms of both earnings and dividends for the first time ever in 2021, as it knocks the traditional heavyweights of oils and financials off their perch. 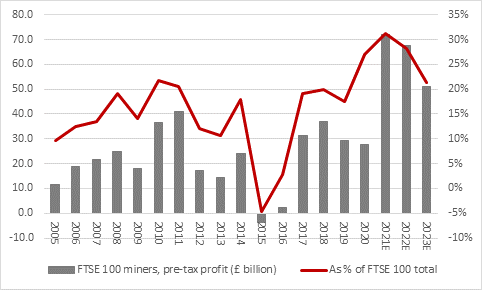 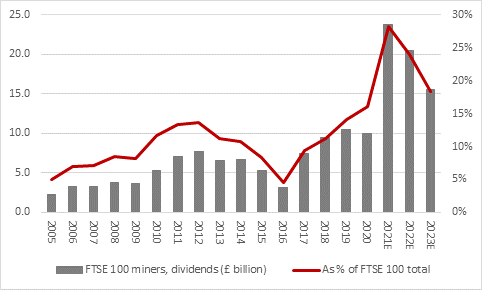 “However, analysts clearly don’t think it can last. They are forecasting sharp drops in profits – and therefore dividend payments in 2022 and 2023 – with the result that mining’s percentage contribution starts to taper off, too, although financials only reclaim the top spot for earnings and dividends in 2023, if analysts’ forecasts are anything to go by.

“That may also explain why the miners look so tempting on both an earnings and a yield basis – analysts think that 2021 is going to be as good as it gets for the diggers (and cyclical stocks always look their cheapest at the top of the cycle.

“This is not to say that the analysts are right.

“China may feel the need to boost its economy if the regulatory medicine leads to a hard landing for Beijing’s economy and the global recovery could yet catch light of the pandemic is beaten off, consumer confidence returns and both fiscal and monetary policy are kept loose (as frankly seems likely). The commodities cycle – and therefore mining stocks – could yet surprise on the upside, to the benefit of UK investors, given the importance of metal producers to the FTSE 100’s aggregate profits, cash flows and dividends. The index looks cheap if metals prices fall and keep falling perhaps it deserves to be cheap as the earnings and dividend forecasts which make it look attractive are not guaranteed to be right, given the volatility of miners’ earnings streams.”