Will the iPhone 11 launch give Apple’s shares a lift?

“Shares in Apple have surged by more than 40% from the low reached after the profit warning of 3 January but they have yet to recapture the all-time high reached last September, when the firm’s market valuation briefly exceeded $1 trillion. The major reason for this is poor earnings momentum and investors will be looking forward to the iPhone 11 launch on 10 September every bit as keenly as gadget fans, in the hope that it can spur profits and the share price alike,” says Russ Mould, AJ Bell Investment Director.

“Apple’s shares have not done badly since the launch of iPhone X on in September 2017, advancing by just over a fifth, but the incremental improvements offered by the XS, XSMax and XR – at higher price points – did nothing for profit growth or the share price.

“After a 10% year-on-year drop in EPS in the second quarter of the fiscal year to September and a 7% drop in the third, guidance given by chief executive Tim Cook still leaves analysts pencilling in a 3% year-on-year slide in the fourth and final period at $2.83.

“This is Apple’s third profits slide of the decade. The previous slumps were related to iPhone product cycles and this one may be no different, given slower-than-expected take-up of iPhone X after some meaty price hikes, a slowdown in China and concerns over lengthening product cycles as cost increases make Apple buyers ponder whether the incremental functionality is worth it or not. 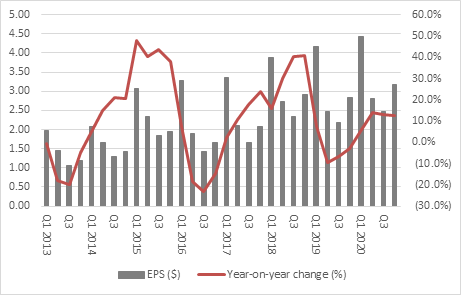 “This does raise the stakes for the iPhone 11.

“Although Apple has stopped releasing iPhone units – itself not a great sign, in all honesty – the firm has continued to publish revenue figures.

“Sales fell year-on-year for the third straight quarter last time, down 12% to $26 billion and fans of the stock will be looking for improved momentum here.

“That said, services and wearables have taken up some of the slack. Their combined sales rose by 22% in Q3 to $17 billion, some 32% of the group total (up from 19% three years ago). There seems little reason to expect app sales to stumble, barring perhaps a nasty recession, and they also make Apple customers sticky and more likely to upgrade their devices in the future, creating a bit of a virtuous circle.” 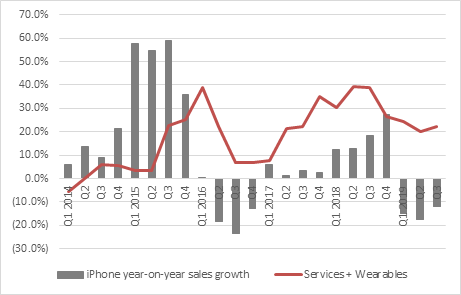