“Kingfisher’s failure to increases its dividend for a tenth year in a row – and join an elite club of just 26 current FTSE 100 members to have such a record – is the subtlest indication that its turnaround plan is not delivering. The decision to change not just its head of IT and also its chief executive is more of a giveaway, as is a change in how the company will measure the success of the ONE Kingfisher project’s results,” says Russ Mould, AJ Bell Investment Director. 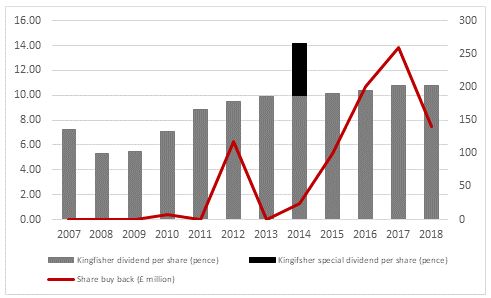 “Current boss Véronique Laury will point to the completion of £600 million in share buybacks on schedule, as a counter to the dividend disappointment. But paying a dividend is a greater commitment than a share buyback, which can be flexed so much more easily, and ultimately the buybacks have done nothing to help the share price. After three years of ONE Kingfisher, the shares are down by roughly a third, whereas the FTSE 100 is up by a fifth over the same period.

“Granted, Ms. Laury has not been helped by weak economic growth in the company’s core British and French markets and a further lurch down in sales in the latter at Castorama held back group-wide performance in the fourth quarter. Revenues fell by 4% on a like-for-like, constant currency basis in the final three months of the year, the worst showing since the launch of the ONE Kingfisher plan. 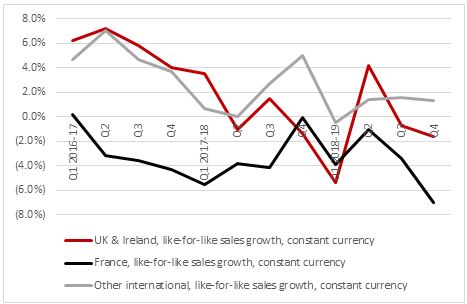 “That in turn led to a sixth year-on—year drop in like-for-like sales in the last eight quarters and also a drop in adjusted pre-tax profit to £573 million, against £683 million a year ago and well below the consensus forecast of £622 million. 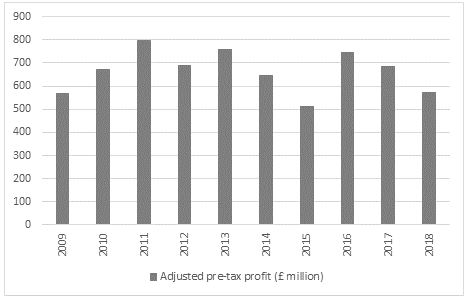 “The board and investors alike have clearly lost patience. The move to switch how Kingfisher measures success of its turnaround may at least be one step forward here.

“Rather than the somewhat nebulous goal of ‘a sustainable annual profit uplift of £500 million by 2020-21, over and above what the business would have delivered without the plan,’ the board will now focus on ‘ growth in sales, gross margin, retail profit and return on capital employed over the medium term.’

“That unfortunately leaves Ms. Laury with nowhere to go after just over four years in the hot seat and the company is now looking for her successor.

“Ms. Laury is one of just six female FTSE 100 CEOs at the moment and she is currently the third-longest serving of that group, which will be joined by Penny James when she takes over at Direct Line from Paul Geddes on 9 May.

“Depending upon the timing of Ms. Laury’s departure, Kingfisher could become the seventh FTSE 100 member to get a new leader in 2018. Three have already done so and three more are about to make well-flagged and carefully-planned changes.”