•    Since 21 February 2020, equities have outperformed bonds (despite the pandemic and a recession) but since 9 November commodities has been the best-performing asset class and Government bonds clearly the worst*.

•    Since 21 February 2020, Japan and Asia have been the best-performing equity markets but since 9 November, emerging markets have taken the lead, along with Japan, and America has ranked dead last*.

•    Since 21 February 2020, Technology has dominated, as its many sub-sectors have helped corporations and consumers alike cope with the pandemic and lockdowns. Technology has continued to perform but the previously bombed-out Energy and Financial sectors have come to the fore since 9 November, after which point expensive defensives and utilities have found themselves out of favour*.

•    Since 21 February 2020, the biggest UK equity market gainers have included online and value retailers, such as AO World and B&M European Value Retail, spread betting service providers and bookmakers, including Gamesys and Flutter, and providers of life’s essentials, such as Ocado and Premier Foods. Since 9 November, recovery plays have come to the fore, with leisure and travel stocks such as Cineworld, FirstGroup and SSP leading the way, while more defensive plays such as Unilever, AstraZeneca and Reckitt Benckiser have all lagged the wider UK indices*.

*All data based on total returns in sterling terms.

“It seems remarkable now just how relaxed financial markets were during the early stages of the COVID-19 outbreak in Asia and even Italy, but confidence ebbed rapidly from late February onwards once they grasped the gravity of the situation. Share prices plunged for a month and even though some found their footing, plenty of others in the worst-affected industries just kept falling, in the view that their fortunes may never be the same again.

“Yet the picture has changed again since ‘Pfizer Monday’ in early November. Investors seem more optimistic, perceived pandemic and lockdown winners have begun to lose momentum and potential recovery plays have begun to gain it, while the biggest theme of all is perhaps yet to play out, as markets ponder whether inflation is finally about to rear its head once more. 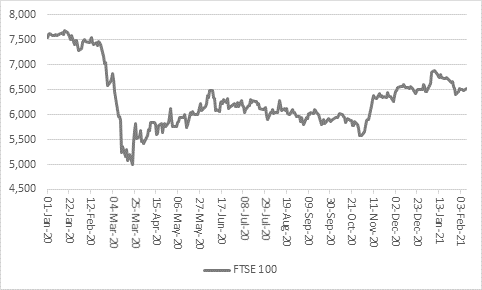 “As the initial panic hit in February and March, bond yields fell and bond prices rose as investors looked for havens and shelter from both the pandemic and the seemingly inevitable collapse in corporate earnings, dividends and economic activity. Share prices plummeted for a month, oil prices collapsed (and even briefly hit negative territory) and even Bitcoin found itself out with the washing, as investors sold what they could, to either lock in profits, raise cash or cover for losses elsewhere.

“But the sell-off did not last long. Central banks and Governments moved swiftly to provide monetary and fiscal stimulus and support the economy, heading off the risk of a wave of corporate bankruptcies and a surge in unemployment, while investors began to quickly choose between those companies whose business models were perfectly suited to lockdowns, home delivery and home working, and those whose were not. Soaring share prices for perceived winners supported or even boosted headline indices and ample liquidity from central banks and Governments emboldened investors to hold on and even start to assess what a post-pandemic world may look like.

“Since Pfizer Monday on 9 November the picture has changed again. Vaccines from Pfizer/BioNTech, Moderna, AstraZeneca/University of Oxford and others have raised hopes for the containment of the virus and a return to something like pre-pandemic levels of economic activity. Yet more fiscal stimulus from Governments and yet more Quantitative Easing (QE) from central banks has provided investors with cheap money, reaffirmed the view that more stimulus would be available if markets or the economy wobbled, stoked a fresh bout of risk-taking and also prompted debate over whether too much liquidity had been made available.

“Money supply growth is going through the roof in the UK, USA, EU and Japan and some investors are now starting to ponder the return of inflation, especially as central banks declare they are willing to let inflation overshoot to compensate for prior periods of undershoot, relative to their 2% targets. This is why commodities and equities are outperforming bonds hands down with only the riskiest form of debt – high yield, or ‘junk’ bonds – offering any sort of performance, since this asset class is more closely related to equity in how it behaves anyway.

“Over the past year, America has done well, but Asia and Japan have done even better, in total return, sterling-denominated terms. Despite sporadic outbreaks and public discontent with how the Abe and Suga administrations have handled the pandemic, Japan has suffered less than many of its developed-economy counterparts and its export-driven economy has also prompted interest in its stock market as a post-pandemic recovery pick. In addition, Japanese equities still trade way below their historic highs and trend valuation levels, unlike the USA in particular.

“Asia was first in and first out of the first wave of the pandemic and subsequent waves appear to have been equally well managed. Asia has had experience of such medical emergencies before, after SARS and avian flu, and it has put this experience to good use, to the benefits of its economies and investors.

“The initial panic shook confidence in the global outlook and as a result emerging markets were hit particularly hard. This perception has reverse since Pfizer Monday, as investors have looked for cheap, downtrodden recovery plays. Emerging markets have also received a boost from a weaker dollar and stronger commodity prices.

“Note how the USA has been the worst performer in sterling, total return terms since 9 November. Dollar weakness has a lot to do with that – investors snapped up dollars as a haven asset during the early stages of the pandemic but the prospect of a vaccine has therefore dampened demand for greenbacks – but the US continues to look expensive on any historic valuation metric that you care to use. This is not the case with Japan, Emerging Markets or even the UK, which has tried to forge something of a recovery, although investors still seem unsure about its prospects, in light of the pandemic, Brexit and fresh uncertainty of the State of the Union.

Source: Refinitiv data. Total returns in sterling, based on the S&P Global 1200 indices

“It has been a case of technology first, the rest nowhere since the pandemic, although that only served to accentuate a trend that was clear even before the virus hit home. The FAANG stocks cemented their position as market leaders as they helped companies and consumers stay in touch, work, eat, relax and frankly cope and many other tech firms came into their own for the same reasons. Consumer Discretionary stocks also did well, especially if they had a decent website, as those consumers who kept their jobs and had not been furloughed saw their commuting expenses drop and incomes rise. Materials gained as markets began to price in an economic recovery and raw materials prices first bottomed out and then began to rise.

“The price of oil was, in the very narrow context of financial markets, one of the main victims of the early stages of the pandemic. Demand collapsed, supply kept coming and a shortage of storage space and the risk of physical delivery prompted financial buyers to dump crude however they could and oil prices even briefly went negative. That in turn hammered the shares of oil companies, who also had to confront pressure from their shareholders about their preparations and strategies for a zero-carbon world come 2050.

“Yet since 9 November, the worst-performing sector has become the best-performing one. Energy is top of the pile, buoyed by a recovery in oil prices to their pre-pandemic levels of $60 a barrel. Hopes for an economic upturn, and increased demand, are meeting ongoing supply restraint, thanks to output discipline at OPEC, reduced capital investment at the oil majors and lower shale output in the USA, as a result of low oil prices, heavy debts and the Biden administration’s determination to clamp down on fracking.

“Also notable since Pfizer Monday is the marked underperformance of economically insensitive, defensive names such as consumer staples, healthcare and telecoms, as well as so-called ‘bond proxies’ such as utilities. This reflects markets’ current preference for recovery plays over havens, something which could still flip back if the virus proves more difficult to conquer than hoped, vaccination programmes fail to run smoothly or the changes in human behaviour and economic activity prove more deep-rooted and long-lasting than investors currently hope.

Performance by stock, in the UK:

Source: Refinitiv data, based on the FTSE 350.

“All of these global trends, by asset class, geography and industrial sector, can also be seen within the UK stock market, as benchmarked by the FTSE 350 index.

“Since 21 February 2020, the best-performing stocks have included online retailers such as AO World, those whose price points were best attuned to shoppers’ needs in straitened economic times, as such B&M European Value Retail. Other winners have included bookmakers Entain and Flutter, thanks in part to the deregulation of US markets and thanks in the main to punters looking for something to do while stuck at home, a trend which has also helped 888 and Gamesys. Increased interest in recovering stock markets from sofa-bound traders may have helped CMC Markets and Plus500, too, while Premier Foods and Ocado have helped to keep a housebound nation fed and watered.

“Laggards have included airlines, retail store landlords, travel agents, travel companies and bingo hall specialists such as easyJet, Hammerson, TUI, Carnival and Rank, all of whom will now be waiting to see when and to what degree demand for their products and services returns even in a post-pandemic world.

“Yet investors have begun to take a more optimistic view of even some of these stressed companies and industries since Pfizer Monday.

“Recovery plays have come to the fore, with leisure and travel stocks such as Cineworld, FirstGroup and SSP leading the way, while more defensive plays such as Unilever, AstraZeneca and Reckitt Benckiser have all lagged the wider UK indices.

“As is always the way, markets have switched from greed to fear and then from fear to greed. Since 9 November, the combination of vaccines, fiscal stimulus and monetary stimulus has persuaded markets to look on the bright side and go even beyond that, as they contemplate whether inflation is about to make an unexpected return to the financial stage. 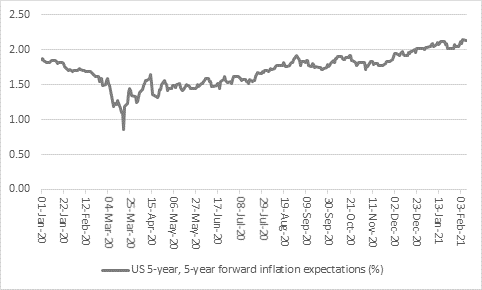 “If inflation does appear, after 40 years of disinflation, low inflation and even fears of deflation, it would be the ultimate game-changer. Everything that has worked for investors, brokers and fund managers over the last four decades in a low inflation world – long-duration assets such as bonds, technology and biotechnology equities and secular ‘growth’ stocks – would struggle in this completely new environment, at least if history is any guide.

“Instead, investors might start to look toward cyclical growth (or ‘value’ for want of a better name), emerging markets and commodities and ‘real’ assets, to capitalise upon an economic upturn and inflation’s erosion of debt in real terms. They might also seek protection from higher bond yields and higher interest rates, as well as the erosion of the purchasing power of cash - a theme to which advocates of gold and Bitcoin will readily warm.”