New research by AJ Bell, using the last 10 years report and accounts for every FTSE 100 firm, shows that the gap between stated (or statutory) operating profit and how companies prefer to present the same figure (either on an adjusted, pro forma or underlying basis) is at its highest level in a decade. 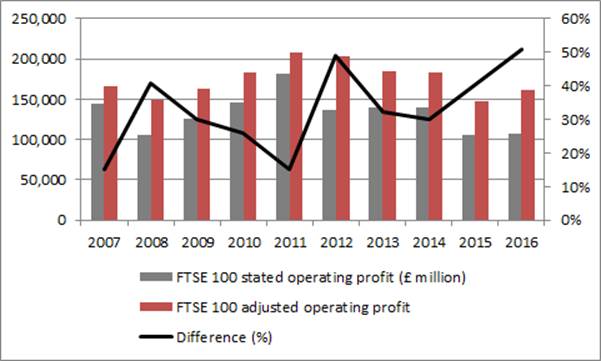 “There are two, conflicting, possible interpretations for this trend.

“Either, companies are simply being more transparent, providing greater clarity to shareholders on the many moving parts which make up their business and enabling investors to get a better view of what is really going on under the bonnet.

“Or, companies are instead intentionally muddying the waters. Some even present sales figures in multiple formats of actual, underlying and underlying in constant currencies. Others point to underlying metrics of their own choosing and publish those figures first in regulatory announcements (while at least flagging that they are not based on generally accepted accounting principles, or GAAP). In both cases the goal is to put a positive gloss on their figures. The end result may therefore be a higher share price (to enhance the value of executives’ shareholdings) or a profit metric which helps management to hit targets and trigger further bonuses or share and stock option awards.

“However you interpret it, one thing that is clear is that accounting practices and the way companies report their numbers is coming under greater scrutiny.  Britain's accounting watchdog has said it is investigating the audits conducted by Deloitte regarding two of the annual financial statements of outsourcing services supplier Mitie, which adds to the ongoing debate over the role of auditors in the wake of the accounting scandal at BT’s operations in Italy.  In addition, Unilever has moved to trigger management share awards off underlying earnings and there have been shareholder protests over executive pay packets at Smith & Nephew, Burberry and Persimmon.

“All of this flags the importance of understanding how companies not just make a profit but how they present and report it.  Investors need to be even more diligent than ever when it comes to doing their research. Ultimately clarity and consistency of reporting standards are a good sign. Restatements and obfuscation are not.”

A big gap between stated and adjusted earnings does not necessarily mean a company is inherently a poor investment. Investors still need to assess its competitive position, financial strength and management acumen and checking the accounts can be a useful way to judge the quality as well as the quantity of profits and cash flow.

To protect themselves, and their portfolios, investors can apply the following five checks:

One test of the quality and reliability of a company’s earnings is therefore growth in NAV per share, especially when coupled with the gap between adjusted and stated profits. The table below shows the top 5 and bottom 5 FTSE 100 firms in terms of total shareholder returns (capital gains plus reinvested dividends) from 1 July 2007 to 1 July 2017 and compares that to NAV growth and the adjusted/stated operating profits gap between 2007 and 2016.

While some allowances need to be made for the impact of acquisitions and disposals, it is noticeably clear that:

If these five scratch and sniff tests mean the investor is not satisfied at the end, they have two options, either: